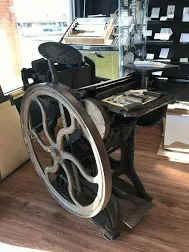 Okay, fellow capitalists, let’s talk about the free press.  Free speech is guaranteed by the first amendment of the Constitution, isn’t it?  Well, yes, sort of.

Who was it said there’s no freedom of the press if you don’t own one?  The web cesspool Parler didn’t own its press. It rented distribution from Amazon’s hosting service.  Amazon decided to kick out the tenant because it was a hotbed of danger.

It’s the same deal as if, say, Jared K was wandering through one of his slums and found a meth lab in Apartment 3B.

That tenant would soon be out on the street. Parler was Amazon’s tenant. Pseudopresident trump was a tenant at Twitter with a summer palace rented from Facebook. They threw him out, just as the trump organization might evict a troop of tap dancers who kept all the other renters from a good night’s sleep.

So, with these big platforms gone, what’s a bunch of True Real Gen-Yu-Wine Amurkans do once they’re finished cleaning their AK’s, cooking their Meth (Hey Honey, what’s for dinner?) and um… courting... their cousins?

Why it’s back to the internet where lesser but more user friendly chat sites are ready to welcome them with open (and uncontrolled) arms.

At the moment, according to the news website Axios, “Signal” is the fastest growing of the newcomers. But CloutHub and Rumble aren’t that far behind.  Ever heard of any of them?  Probably not. Well, now you have.

Thing is, they’re scattered.  They haven’t coalesced into a force yet.  That may dampen the fun planned for inauguration day.  Not to worry.  They’ll grow.

The same is true with right wing TV.  Fox will get its act together.  There are some talented newsies there. And executives frightened of drops in ratings and revenues.  So, they’ll have their buyouts and layoffs. And their swollen balance sheets will be … um, fair and balanced. But the junior players like Newsmax and AON don’t have the reach, called “clearances,” that it takes to build a solid national audience.

As for free speech restrictions… the Supremes ruled out the kind that we often summarize as “you can’t yell ‘fire’ in a crowded theater.” These days, you can’t do that anyway.  There are three reasons:

1.   Many if not most movie theaters are closed.

2.   Those that are open don’t get all that crowded these days and