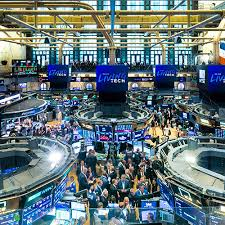 This is part of our series on Investments for the Broke.

The title is stolen from a folk-ish song about people who don’t care if they lose as long as they can play.

Warning: Do not take your investment advice from paper pushers pushing stocks on Twitter.  The stock market is a bubble and while it doesn’t seem so, the gains are mostly paper and the inmates have taken over the asylum.

In recent days the star of the exchanges has been a penny-ante chain of stores called GameStop (GMS:NYSE).  It has risen at times in four-figure percentages.  People are buying it like crazy.  And crazy people are buying it. Thursday’s closing price was $193.60, down from about 347 earlier.

Without going into the mechanics of the increase here’s what’s been happening.  GameStop sells video games mostly to kids.  Its stock price was near nothing and over the course of a few days flew up to several hundred dollars.

Investment professionals had figured the stock would tank. So they bet on the coming loss by short selling shares. Short selling is a legal way of moving paper around, so you benefit if the other guy loses. The professionals saw the company as ready to take a tumble.

Then along came the new prophets of Wall St. Including Elon Musk who should know better.  He and others pushed the broke to invest.  The broke invested. The short sellers said “uh, oh, we were wrong. The stock is rising fast, we’d better sell.” They sold. That drove the price even higher.

Some trading has been restricted.

At this point, we need to stop and point out some things:

The exchanges are casinos and there usually are a goodly lump of big winners and big losers.  But long term, the house always wins.  The house in this case is the community of professional stock transfer agents, AKA salesmen.

You can’t time buys and sells accurately because many of the reasons stocks rise and fall have little to do with the value of the companies or the ability to reason.  It’s all in the collective emotions of the people whose hopes and fears run the machinery of trading. Sometimes -- but not always -- a product of external circumstances.

So in the case of GameStop, some people are going to make a bunch of money but before you transfer your life savings to your trading account remember that by the time an increase becomes a big news story, the story is likely to end.  And GameStop is a big story.

But there is an upside to all this:  The high flying know it all professional masters of the universe who make money whether their customers win or lose are going to be in for an eventual shock.  This stock is going to re-tank.  And it’s going to take a lot of other issues down with it.  And during the down part of the roller coaster ride, it’s going to scare the daylights out of a lot of people who need the daylights scared out of them.

Today’s Quote: “The market can remain irrational longer than you can remain solvent.” -- John Maynard Keynes.