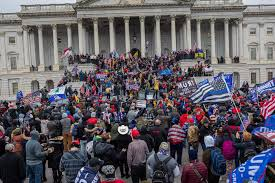 Big events get a big response. So it’s unsurprising that they’re going to form a commission to discover what caused the attempted coup at the US Capitol on January 6th.

Our sense of history or of record keeping all but forces us to go along.  Spend a few bucks that could otherwise be used for stimulus checks or fixing potholes on the highway or building a bridge to nowhere.  We “have” to have something for the record.

But this isn’t the Kennedy assassinations. It is not the MLK assassination.  It isn’t even 9/11.  This played out in real time on every TV or computer screen in America.  We are all witnesses.

And it’s been brewing for years. You can pick your starting point. Maybe it was during the primaries or the election of 2016. Maybe it was when the first tweet rolled out of donald trump’s iPhone.  Maybe it was the rally that he held just before the start of the insurrection.

It doesn’t matter. It was inevitable and we saw its deadly, shabby end product as it happened.  It started with a sitting president urging -- demanding -- his coven of acolytes to march on the seat of government, promising that he’d be right there with them, which he wasn’t.

We watched the coward-in-chief slink back into the relative safety of a secure White House while his hooligans killed cops or were killed by cops. We watched the suddenly heroic-seeming vice president and other high ranking government types crouched in the screwball corners of the building that until that moment stood as a symbol of American values and American democracy, imperfect as it may be. We watched as that building turned into just another palace of a banana republic or a soviet slave state.

So, sure. Name a commission. It will conclude something close to what we all saw. Close but stripped of some of the horror and wrapped in the twisted terms that serve bureaucrats and lawyers both public and private.  It will satisfy nothing.

Like the Warren Commission, and the investigations that followed the murders of RFK and MLK it will spawn conspiracy theories that will keep scholars and wannabe investigators busy for years to come.  It will prove nothing more than what we heard with our own ears; saw with our own eyes.

It will not bring closure.  It will not un-ring the bell or put the evil genie back in the bottle.  What it will do is fuel our hardwired need to guess and second guess and invent stories that haunt or titillate. It will make us vow “never again.” Again.

Sure, go ahead and investigate.  Write down what you find. Bind it in leather. Then leave it where we can all read it, though few actually will.