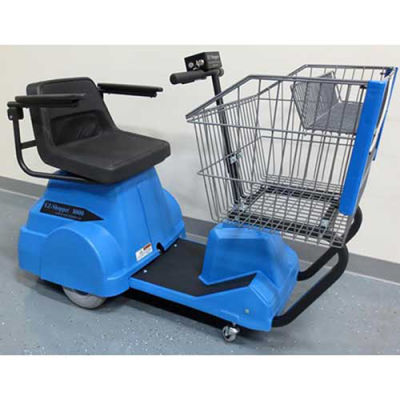 When you use these machines for a while, things happen. One thing: if you work at it, you get good at it.  Rolling around the supermarket at 6 or 7 in the morning means you can eventually learn not to crash into shelves.  You can learn how to position the machine so it fits in the narrow register aisles designed to frustrate motorized users and send them to the (usually only) one open lane with the wheelchair logo on the lighted sign.

You learn how not to knock things over.  You learn about the turning radius. You learn how to pack a week’s worth of stuff in a basket designed to hold little more than enough for tonight’s dinner and maybe tomorrow’s breakfast without squishing the loaf of bread, breaking the eggs or crushing the tomatoes atop which you’ve stuck a bag of onions or potatoes.  Or one of those gallon jugs of Tide with Febreze or is it Snuggles?

Which brings us to Martha and Ed.  I give these carts names.  I’m still awaiting word from Wal-mart’s legal department. My question was whether I would be guilty of or at least charged with vandalism if I brought my plastic label tape along and made stick-on nametags for them.

They may not have taken the question seriously. They should have.

Here’s my naming standard:  The few that are flawless get women’s names.  The rest are guys.  These carts get hard use, so there are few without flaws.  One is Martha, named for the oh-so-elegant Connecticut lady who has a magazine, does cooking shows on TV and hawks a line of casual clothing on one of the shopping channels. I’ve forgotten her last name.  You might remember.

Martha cruises the aisles of the grocery department with grace and elegance.  It is as smooth in reverse as it is going forward.  It turns smoothly.  It makes no extraneous noise other than the obnoxious beep they all emit when you put them into reverse.  Martha is pretty new as these machines go. So the battery retains power long enough for two consecutive drivers to get through their trips without having to call the manager while stuck in an aisle where you are surrounded by the frigid air-leaking cabinets of frozen vegetables or ice cream.

Ed is an older machine and has steering problems. The mechanism jams when you try to make a left turn.  Right turns? Perfect. Every bit as good as Martha.  But no left turn. It is named for a friend because its turn protocol matches his politics.

Another male: Drill Sgt. Sol. He won’t go unless your rump is firmly planted at the back of the seat and you’re sitting at attention.

And there’s one I haven’t yet named, but not for lack of trying.  This one takes off like a shot and then comes to a dead stop at the first opportunity to block both foot and manual cart traffic and then … Absolutely. Refuses. To. Move. Even with a fully charged battery. Even if you’re sitting with your rear end precisely positioned and are sitting up with Military Parade Straightness.

If they don’t allow me to label this gang, at least maybe they’ll let me tie a small pink ribbon on Martha’s handlebars and a miniature “no left turn” sign on Ed’s.

I’m Wes Richards. My opinions are my own but you’re welcome to them. ®
Any questions? wesrichards@gmail.com