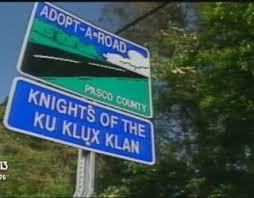 New Port Richey is a small town in Pasco County, Florida, near Tampa and they have a pretty restrictive anti-noise law.  It says anything louder than a quiet conversation is illegal.  So it’s not surprising that the cops came out to shoosh demonstrators from Black Lives Matter recently.

It also is not surprising that white supremacist Proud Boys noticed the demonstration and sent in the clowns.  That’s when the noise level rose above the hushed tones the law demands.

So the cops did what cops are supposed to do. They started breaking up the Loud Noise Matters vs. Loud Boys with guns.  After all, the population skews older and those of us of a certain age value our peace and quiet.

Things never got fully out of hand. But there were arrests and there have been charges, though nothing truly serious.  You’ll never guess who got charged and who didn’t.  Or maybe you will.

Spoiler alert: All the charges went to the Black Lives Matter demonstrators.

All this is happening before a backdrop of new general restrictions. Florida’s Republican governor Ron DeSantis wants laws that would attach even larger fines and jail time against protesters.  Fifteen years in jail if “more than nine people participated in a riot.”

Parse that concept. First, how can there be a “riot” with only ten people? More important, what is a riot?  Surely you know one when you see it. The attempt to overthrow the US Government at the Capitol building on January 6th was one. But what about when nine people watch a tenth try to topple a light pole or even an empty police car?

What about ten people chanting in front of a church or a city hall? Do cops run up with drawn decibel detectors, meter needles waggling in the red zone?

Someone throws a brick through a store window. Is that a riot? Certainly, it’s a crime. Wild guess: something about that already is on the books. But should it be a crime with a 15-year punishment?

Are there silent riots, as when seven or eight linebackers with assault rifles stand silently glowering at a bunch of black teenagers with “matter” signs?

Florida is not alone. Twenty-eight states have passed or are considering stronger anti-demonstration laws. Most, if not all those states already also are making it harder to vote. They’re trying to create a caste system that will evolve into a new definition of “human,” dependent on such characteristics as skin color or viewpoint.

When you drive to New Port Richey you will pass along roads with “sponsored” zones. Probably there are sections naming the service clubs or veterans’ organizations. But you’ll also find one paid for by the Ku Klux Klan. It’s been there since 1993.

Oh, and when you drive into town, make sure you’re wearing a gag under your mask.