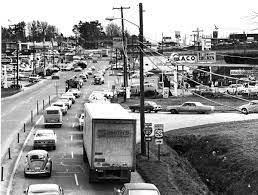 There was plenty to like about the 1970s. Then this happened.

There are a lot of good things to say about the early 70s. Nice movies. Good music, at least some, where you still understand the lyrics.  Mainland China.  No more Nixon. But one thing may be the most memorable.  Gas lines.

Our close allies in the middle east, you know… friendly nations like Saudi Arabia decided they’d withhold oil and that resulted in one of the worst episodes of the decade, gas lines.

We lined up. We waited.  We made sure our license plate number ended on the right day, odd or even numbers... Odd plates on odd days, even plates on even days. It wasn’t quite rationing.  But restrictions applied.

Never did find out what day you went -- odd or even number -- if you had a vanity plate with no numbers. What day did “Hot Shot” legally get on the line?  Or “Martha?” Or “Bobs Toy?”

The price of gasoline averaged out to about 69 cents a gallon in the early years.  It shot up to (gasp!) one dollar and then went even higher.  That was big money in those days.

And now, history repeats itself.  A bunch of hackers shut down the Colonial Pipeline and demanded owners pay a ransom.  Who were these hackers?  Maybe a kid fighting acne and loneliness in his parents’ basement in Bulgaria.  Maybe whatever initials the KGB goes by these days.

The shutdown… just five days… resulted in shortages, price increases and -- wait for it -- gas lines.  Not everywhere. But not nowhere, either.  No shortage.  Just no transportation.  Amazing what you can do on the internet with a few keystrokes.

Does this strike you as strange?  The pipeline starts in Texas and ends in Greater New York.  But the shortages hit the southern end of the pipe harder than the terminal.

How about this for strange?  Ransomware shuts down the computer until the ransom is paid.  The pipeline is moving again.  So who paid whom and how much? Current reports put the payoff as $5 million in the artificial internet currency “Bitcoin.” This from a company that has said all along “we don’t pay ransom demands.”

Or was it a matter of “our” hackers were better than “their” hackers and undid the lockout with a few keystrokes and not even a call to Microsoft Customer Support.  They’d still be waiting if they relied on outside help.

One thing’s pretty sure.  The problem wasn’t solved with software self-monitoring.  That takes even longer than waiting for an operator.  And they don’t even bother insulting our intelligence by telling them “Your self-diagnosis is very important to us.”  They just put up a rotating hourglass.