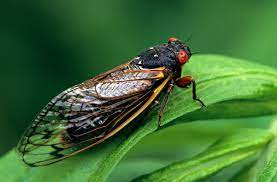 His name is Alfredd. If you write to him, don’t insult him by leaving off the second “d.” He has a lot of friends and a huge family, all of them sticklers for spelling.  And they know where you live.

The invasion comes every 17 years. Tens of millions of ugly, noisy and harmless bugs emerge from deep underground and fill the air in the northeast with their chorus of buzzing.

We know we’re not the only creatures who know how to count.  Monkeys know.  Some horses, too. Crows are said to be able to count all the way up to seven.  That’s pretty sharp for a birdbrain.  But bugs?

And not only do they count, but you can tell the boys from the girls.  The girls do not buzz. The male buzz is a mating call.

Can you speak Cicada?  To us, it all sounds the same.  But chances are the males are testing their pickup lines. “Hey, cutie, do you come here often?” “Miss, you look like a Pisces.”  “I saw you below ground. You’re looking fine up here.” “May I buy you a root?”  “Bartender, I’m drinking the same sap she’s drinking.”

Kids want to make them pets.  But they have to outpace cats who have an inbuilt recipe that starts with catching the insects, then tossing them like a salad so they land on concrete and are stunned.  Kind of like seagulls dropping shells on the highway to open them or you choosing a live lobster from a fish tank at a seafood joint.

Let’s get back to that timing and calendar thing for a moment.  The county that’s home to the Wessays Secret Hillside Laboratory is off schedule. Instead of this year, cicadas here are not scheduled to arrive until 2025, four years from now.  How did that happen?  Yeah, we’re generally behind the times here.  But still…