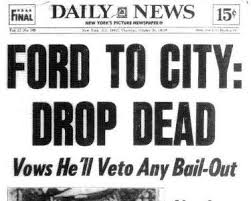 Let’s start with a joke that has some relevance and some truth but is rated R: “At birth men emerge from the womb and then spend the rest of their lives trying to get back in.”

Well, that’s what happened to New York’s bare-knuckles but legitimate tabloid, the Daily News.  It was started by the owners of the Chicago Tribune in 1919 and passed around like a note in Miss Grundy’s classroom until finally bought by the Tribune Company which now goes by the imbecile name “Tronc” which stands for Tribune Online Content.”

Another joke:  want to lose ten pounds of ugly fat? Cut off your head.  And so went the main editor and the managing editor.

The Daily News started and remains the working man or woman’s newspaper.  To prove it, I will here reproduce in its entirety its original stylebook from 1919:

Tell it to Sweeney.

That’s it. Four words that no one in New York during the huge influx of Irish laborers and families with minimal to zero education would misunderstand.  That’s what guided the paper all these years.

When the dust settles there will be about 50 people doing the news.  Fifty. For a circulation area of 18 counties and a population of 22 million people.

Today’s “Sweeney” might be named Jose or Ling Bao or Vadim or Ravi.  But the name makes little difference.

So what are they, newspapers?

Actually, newspapers and magazines are the vehicles for in depth reporting.  And that’s where radio and television get a lot of its news, which means that’s the way you get a lot of your news.  So when they’re all dead and buried, your internet, TV and radio news -- such as there is left of it -- will also become the electric equivalent of killed weeds.

The Daily News hasn’t announced its own death. Yet.  Probably because there isn’t room for that kind of thing in the paper anymore.  And in fact it hasn’t happened. Yet.  But if Tronc continues in its present direction, it will. And you can hear all about it on Lester Holt’s last show.

I’m Wes Richards. My opinions are my own but you’re welcome to them. ®
Please address comments to wesrichards@gmail.com
All sponsored content on this page is fake.
© WJR 2018