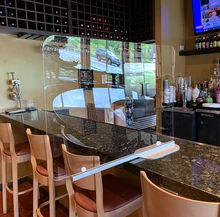 Billie Mae Harper hit a wall when the pandemic hit everyone else. It’s not easy to lose money as a saloonkeeper in a drinking town which is where Billie Mae kept her saloon.  But she did.  The rednecks just squeezed out the white necks and the college kids and even the neighborhood hangers-on.

So while she was closed down, she sprang into action. She was going to reopen when permitted but with the rightness of the stopped clock, she had a Big Idea.  Social distancing. Jack and cokes with a twist.

That long oval bar was perfect.  So Billie Mae built partitions of acrylic and inserted them between the stools. When the indoor restrictions relaxed, Billie Mae was ready with the World’s Only Social Distancing Bar.

You could sit there and drink yourself stupid, but without fear of catching that nasty disease.  She put a full page ad in the Pennysaver, put notice on Craigslist. Put a big sign in the window.  Got on the radio to be interviewed about The World’s One And Only Social Distancing Bar.  Bought a lot of pretzels and peanuts and some tiny bowls which she placed in each cubicle.

Opening day comes and Slick James, once a regular, was first in the door. Takes a stool in the middle. Orders “the usual,” which means dumping endlessly varying contents of near-empty bottles with less than a shot left into an Old Fashioned glass of ice.

James is on his second when the second customer comes in.  Johnsie.  Johnsie is a woman and no one knows her real name.  She’s not of carding age. She orders a vodka and cranberry juice.  Next in was Mac. Mac also is a woman.  This town likes to give its girls the names of boys. Mac orders a Jack and Coke.

Slick James is now on his third “usual” and he is surrounded by two lovely women, known to be social. But they are behind Billie Mae’s walls of acrylic and can’t hear each other.

There will be no pickups here tonight.  How do you pick up a girl at a bar if both you and she are in a 1960s TV quiz show “isolation booth?”

This gives Billie Mae her second Greatest Idea of the Century: Install intercoms so patrons can hold conversations.  After all, it is well-known that it’s much harder for one person to pick up another if they can’t converse.

After a brief conversation, Johnsie leaves her isolation booth, steps into Slick James’ and slaps him square in the face.  Mac, also isolated notices.  Not because she is a nosey body but because Johnsie the Slapper is blocking her view of the LMT Movie of the Night playing on the TV set over the bar mirror.

“How do you want your steak, Mac?” asks Billie Mae.

Mac takes the raw steak off the plate and takes it to Slick James’ isolation booth. She places it on James’ developing black eye and swollen cheek.  She writes her address on a bar napkin and slips it to the dry space in front of Slick James. Then she goes back to her cubicle, pushes the intercom button and says “Don’t be long. I have to be at work at 9 tomorrow morning and I don’t have all night.”

If it’s not working, wesrichards@protonmail.com

His name is Dan.   Names run in cycles. Maybe in fads. Time was, you could walk into a crowded room and yell “Hey Jennifer!” Half th...