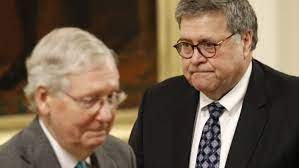 The most hopeful and often smartest rats don’t immediately desert the sinking ship.  Nor do the ones that look at the water pouring through a gaping hole in the hull and ask, “What hole?”

But eventually, the urge to preserve kicks in and even the most loyal rats take the great leap downward, where they drown anyway.

This is the tale of Moscow Mitch McConnell and Billy Boy Barr.  The Senate Majority leader held his nose and leaped overboard when he said “OK, Biden won.”  All the grace of an elephant auditioning for The Nutcracker. Come January, Mitch will have a job, even if it’s a demotion to minority leader.

Oh, where have you been, charming Billy?  Why you’ve realized that when you signed on as Attorney General you signed your political death warrant.  Of course, at 70, you didn’t have much of a future in politics, law or legislation.  So you might as well try to make up for lost time and money with speakers’ fees.

Mitch doesn’t have to worry about money. He married it. Dollars or yuan, it doesn’t matter as long as the exchange rate holds.

Here’s a question. Would you pay to sit and watch Barr deliver a speech or scholarly lecture?  If this guy were lecturing on gravity, he’d drop a bowling ball and ask how you know it won’t fall UP next time?

The answer is you don’t.  But the probability is really, really high unless you’re in a space capsule.  Conditions never bother guys like Mitch and Billy. They just invent stuff and often convince you it’s possible, if not factual.

In times past, that would be tough because conditions counted. Now, they don’t.  Mitch controls a lot of what goes on in the Senate -- some say everything that goes on.

That’s a lot of bowling balls to keep in the air. You have to multitask. Intensely. But, tortoise-like as he seems, you have to give the guy credit.  Maybe he’s part turtle and part mantis -- with all those eye lenses able to see a million things at a time. Maybe he’s Gretzky and knows where the puck will head next even before someone hits it.

Billy is another story. He’s the ultimate lawyer: stall, circumvent, ask for continuances, read the finest of legal fine print then pick some tiny point that you can say justifies doing whatever the hell you want.

Mitch is from Kentucky, deeply aged in charred oak barrels and a product of the Confederacy.  So it’s easy to understand his early surroundings and the resulting patterns of thought and action.

Barr is from New York -- specifically, the Upper West Side -- which is a good thing.  That’s because he’s one of two guys -- the other is trump -- who give the city a bad name anywhere else.

Maybe now that he’s going/gone, the thinking people of the so-called heartland can ease up their criticism. Not that we really care.