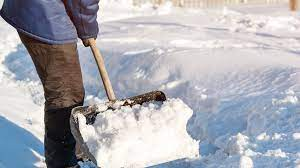 We had a pretty good snowfall around here this week.  About a foot. Maybe a little more.  Took most of one day and half of the next.  It seemed so normal.

Usually, when it snows like that, we get all twisted.  Oh, the shoveling. Oh, the roads. But in the year of the Covid, this was a welcome change.  One we were used to. One that happens almost every winter here in the northeast. One we know how to deal with and then deal with.

People strip bare the store shelves of bread and water and ice melt crystals.  They fill up the kitchen cabinet with pasta and canned this and that. They leave the TV on where meteorologists from the Carolinas up to Maine get on camera wearing snow gear and talk endlessly about every flake that has fallen.

It seemed so normal.  Meteorologist Josh Fosbrink from Altoona… or Al Roker from New York, jolly men with remote control clickers concealed in their hands and maps and charts behind them tell us what happened and what they think is going to happen next.

Solemn-faced government officials come next with dire warnings about staying off the road because “your safety is our biggest concern.”  Old guys wearing jumpsuits or bib overalls in public works garages with mountains of salt or sand behind them carefully explain all they’re doing to make the roads passible.

Ned the driver of a giant snowplow gets a Channel 248 microphone and camera lens stuck in his face and has confidence he’ll get to your street “soon.” So you have confidence in Ned and in Channel 248 News Now.  Maybe well placed, maybe not.  But for the moment you think “oh, good, Ned’s at work on his giant snowplow.”  When there’s snow in the forecast, Ned doesn’t shave for a few days.  Stubble photographs well.

So very, very normal.  No masked doctors worrying about hospital capacity.  No congressional games of chicken over the future of your next dollar. No vaccine worries, at least none right now.

It was a throwback Thursday, alright. Something we’ve lived through since forever.  But there was a difference.  This storm was pretty big given recent standards.  But it wasn’t the least bit scary.

Covid has shown us that our upset about past storms was misplaced and likely will lead us to leave it misplaced in the future.

An old friend, now in the deep south called and asked about the storm. The response after listening: “I haven’t seen snow in a long time.  I’m so jealous.”