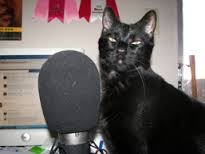 Once again, the know-it-alls are predicting the death of radio.  It’s happened before.  Many times.  And each time, radio surprised the know-it-alls by bouncing cat-like off the medical examiner’s autopsy table to chase a mouse.

FM was rumored to be the death of AM. Didn’t happen.

TV was rumored to be the death of terrestrial radio. Didn’t happen.

That’s eleven lives.  Once you pass nine, the count resets.

Seriously, radio has become a pile of scrap. But dead it ain’t.  People still have it on. (Digression:  when they say “you’re listening to…” they often err.  You may have it on, but you may not be listening.)

The industry has been fretting for years now about declining audience, sinking revenue and increased competition.

Creative types with a few bucks aren’t going to pull the transmitter plug and walk away.  There are new rows to hoe.

Creative types who can sustain a few years of losses for eventual gains… we should have said.

To buy a station now will cost you less than when Clear Channel/iHeart, CBS, Cumulus, Entercom and others were picking up properties like a Dyson picks up pebbles and other debris that no one really ever encounters on the rug.  At some point, that dust bin has to be emptied.  Now may be the time.

--AM sounds lousy.  This is half true. But it’s fine for talk and for music with people who are used to less than pristine audio.

--No one is listening. Wrong-o. Radio still is the medium of choice for most Americans.

--Pay to Play works.  Yes and no. Yes, cable and satellite TV has conditioned us to accept satellite radio and the automakers are pushing us to sign up using nifty freebees and long term trials.

But there’s a difference.  With pay TV, everyone sells content to local service companies which then sell to you along with region-specialized services. Pay radio tries to be both content and hardware providers. Hence, little or no local programming.


--Radio is only for old folks.  Wrong if you train young ears.

So the industry is taking a pounding. And there may be a long- needed thinning of the herd.  But dead? No. There are seven lives to go to get to the next number divisible evenly by nine.

Today’s Quote: “I could tell my parents hated me. My bath toys were a toaster and a radio.” -- Rodney Dangerfield.

I’m Wes Richards. My opinions are my own but you’re welcome to them. ®
Please address comments to wesrichards@gmail.com
© WJR 2016