NEWROSES PA --  (Wessays™) -- Creepy guys in clown costumes?  Not here.  But we’ve developed another scary phenomenon, creepy guys in football costumes. The NewRoses Police Department --the NRPD or “Nerp” as it’s known locally -- reported sightings by the dozen just this past weekend. 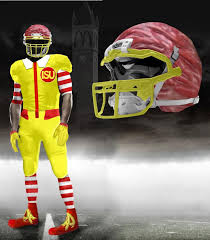 They invade along with throngs of creepy cult followers almost every weekend in the fall.  And it’s the cult followers who are the big problem, though less scary individually than those in costume.

While those in player garb tend to be large and lumbering, they seem to keep to themselves.  Good thing, too because they’re outsized, heavy and fast- moving.  And they seem not to like one another much. They’re forever fighting. They knock each other down. They hurt themselves and each other chasing what looks like a small pigskin covered blimp around the field.

We suspect there are frequent cases of brain injuries as they clash. But it’s been theorized that people in these costumes -- they are people, after all -- have brains in their butts, kind of like some dinosaurs.

There’s some doubt about that, though. Why would they wear protective headgear if there’s nothing up there?  Tradition?  Maybe.

The real trouble comes from the camp followers, rowdy louts who live in tents and Winnebagos spending from Friday afternoon until early Sunday morning with bottles to their lips and Sunday afternoons hung over to the point where they can’t leave town and flood the little country hospital with alcohol poison cases.

So many, in fact, that they have to close parts of the building because the influx of the poisoned disturbs customers at the hospital’s main business, the first floor Jiffy Lube.

The town’s college has a football team, The NewRoses University Centipedes.  The name is said to come from members’ ability to shoot themselves in the foot but still move on the spares.  They’ve even built a huge holding pen -- a concentration camp of sorts -- to house visitors.  It’s called Centipede Stadium.

But the stadium holds only 107,000 people along with the costumed guys who have benches to park their brains on and a large lawn on which to frolic.

Fortunately, this is a seasonal phenomenon.  So the whole thing dies down when all the Centipedes have shot holes in every one of their feet.

Shrapnel:
-- With the political season coming down to the wire… we’ve heard some words far too often.  Shackle and unleash are two of the worst.  There should be a moratorium except when unshackling a jailbird or unleashing a dog.

--Biographer Peter Ames Carlin’s biography of Paul Simon will be published in a few days.  And it’s bound to make waves because it paints the singer/songwriter as tyrannical, scheming and nasty and not as the dreamer-musical genius he’s spent a lifetime trying to play.  The truth at last.

Grapeshot:
-Amazon.com has just sent around a note proudly announcing that the price of Carlin’s book has been lowered by two cents which it is refunding and setting me to wonder where to spend it all.