You have to feel sorry for FBI Director James Comey. He got up on the stage and forgot the most important one liner in law enforcement: “I cannot comment on an ongoing investigation.” 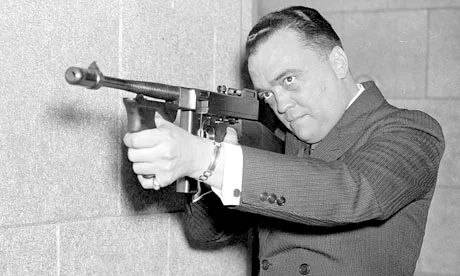 To paraphrase:  “Uh… gee. We found some more stuff that may have come from Hillary Clinton’s private email server. Or maybe it didn’t. But if it did, it might have included some classified information.  Or maybe it didn’t. But we found it when we were investigating a computer belonging to Anthony Weiner and maybe he saw it -- if there is an ‘it.” Or maybe he didn’t.”

The emails were said to be between Clinton and one of her closest and most important advisers, Huma Abedin, Weiner’s estranged wife.

Funny timing on all this, what with the election in just a few days.

Now that the Weiner is out of the bag, the director looks lousy no matter what he says and does or doesn’t say or doesn’t do.

If he spills the beans he’s out after Hillary Clinton. If he doesn’t and it comes out later -- it always does -- it’s a coverup.

At the very least, Director Comey could have convened the seance that all FBI directors conduct with J. Edgar Hoover.

Since he didn’t, we did.

J. Edgar:  Comey? This guy is a screwup. Possibly a com-simp. In my day he’d have landed in the Ada, Michigan bureau auditing Amway.

Wessays:  So what about all this Clinton stuff?

W: So what WOULD you do?

JE: That stuff would go right into my safe, never to see the light of day unless she got elected and then it wouldn’t come out until maybe late September of 2018.

JE: To make sure the democrat party doesn’t win seats in the midterms.

JE: Well, they’re not democratic.  They all jump when that reedy sounding and looking Reid snaps his palm tree.

W: So you’re calling for a coverup?

W: So you keep it in your safe for a couple of years, you don’t tell your agents about it. You don’t leak it to the press…

JE: SPECIAL Agents!  Leak it to the press?  They get wind of it, I can brush them off with “I can’t comment. It’s an ongoing investigation.

Shrapnel:
--Comey’s Stupid pet tricks, to borrow David Letterman’s phrase, could upend the election. This makes the FBI director a loser to borrow Donald Trump’s phrase.  But the real losers are the voters who can’t see through the sham that this election has become.

Today’s Quote:
“He’s like a recurring nightmare. It’s like one of those Damien movies. It’s like every time you think he’s dead he keeps coming again.” -- Al Sharpton on disgraced former congress creature Anthony Weiner’s email and their possible link to the Clinton campaign.

Remembering Ms. Emma McClain, R.N. LPN on what would have been her 107th birthday.