This creature is called the Swift Bird. 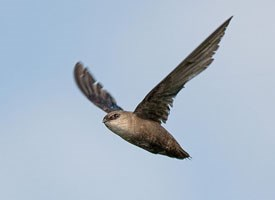 And recently, scientists with little else to do because everything of value already is known and mostly ignored decided it was worth studying.

Some smart grant writer probably pulled this one out of thin air.  And thin air is where this supposedly common bird you never heard of lives.  Not only travels. Lives!

The question in the new study: How long do Swift Birds stay airborne? To find out, researchers at Lund University in Sweden bird watched.  And watched. And watched.

They’re pretty patient over there.  They’ve been a public research university since 1666.  That is not a typo.  Before that what became L.U. was affiliated with a school that was founded in 1425 at the same site.  Do not admit that you hadn’t heard of them.  You’ve had almost 600 years to notice.

Now for the good part: The Lund study shows that Swifts can remain airborne for up to ten months at a time… no landing required.  No change of wings. No airport delays due to icing on the wings (it’s Sweden! Ice is part of the life of every living thing there.)

They eat in midair.  The only time they land is when they have to nest.

They don’t all look alike. But close. So in order to make sure that they weren’t seeing different birds the scientists captured some and outfitted them with bands that emit radio beeps.  Perfectly okay with the birds, evidently.  Makes them feel like modern members of the technological community.

Of course, birds being smarter than most of us think, they may have traded leg bands with others of their species (all while still flying) so as to spread the work.  But as far as can be determined, no bird cheated.

Some of the birds -- they re-captured about 20 of them -- went south for the winter.  To Africa.  While that’s a great distance, it wasn’t too far for the radio signal to reach Lund.

To make sure, the researchers went to Africa to hunt for Swift nests.  They found none.  Who needs a summer cottage when you can fly forever. No. All the nests are in Sweden.

What they can’t yet figure out is how the birds sleep in the air.  But what they have found is that they can mate in midair.

Kind of like you and your seatmate sneaking together into the bathroom on your 777.  They don’t call it the mile high club for nothing.

Shrapnel:
--Looks like we’re going to need some “good guys with guns” since some Trump supporters say they’ll take to the streets in armed insurrection if their candidate loses. Unfortunately, many if not most of those “good” guys are Trump supporters.  Trick or treat never looked so vengeful.