1707 Attack of the Killer Cellphones

By now you know to return your Samsung Note 7 for a refund or trade it in for a more benign model. Pretty good reason: they can catch fire and explode. 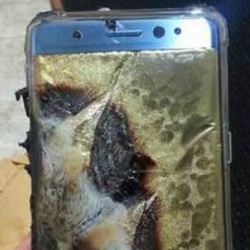 Improvised explosive devices for the masses.  You don’t have to hide a pressure cooker filled with BBs or waste a perfectly good alarm clock when planning your terrorist attack in Boston or Times Square.  And you can hide a telephone almost anywhere.


Weaponize! Mobilize! Take our country back.


Well, it was a good thought. But despite the efforts of the National Android Association, we now have Note 7 control.  Even though cell phones don’t kill people.  People kill people.


(Cellphones are said merely to give you brain cancer. Unproven -- but we know, don’t we. It started as the Great Nokia Conspiracy and spread at 4g speed to all the manufacturers. Or was it Motorola?  Blackberry? No, no, not Blackberry.  Canadians are largely nonviolent. With them you only get occasional worldwide data blackouts, and usually only when they try to upgrade their software, “Gutenberg 2.0.”)


So, all the Note 7s have been recalled.  And Obama is personally going house to house forcing holdouts to turn over their weapons.


How much did those things cost?  It’s really hard to tell because most customers bought them on interest-free two year agreements.


Agreements.  We used to call them contracts. But the carriers are offering “no contract” voice and data plans.  So now we have no contracts, just... agreements.


The actual price was between $600 and $700.  Kind of expensive for a low ranking plebe terrorist just starting his career.  But with an “agreement…” well.  Easy enough to get hold of one.


As of this writing, Samsung doesn’t know why the phones can overheat and start burning.  That seems odd. After all, they designed the things.  Except for the parts they are said to have borrowed from Apple.


The company takes the phones into the lab and tries to duplicate the conditions under which they combust. As of this writing, they haven’t been able to.


And that’s because they’re looking in the wrong places.


They call these devices “smartphones” for a reason.  They’re smart.  And belligerent. They won’t explode while physicists and electronic engineers start playing with them.  The phones hibernate on the lab table.  But when one investigator slips one into his pocket and walks out with it?


You’re not allowed to take these things on airplanes.  So?  Who needs an airplane to fly when the explosion will send you into the air? No peanuts on this kind of flight.  But there’s plenty of legroom… if your legs stay attached.


So do you think Samsung is behind this? Of course not. The phones are invaded by interplanetary aliens.  And Samsung has no beef with Americans.  If they exported the phones to North Korea, you might have a case.  But they don’t… so you don’t.


You still have your Note 7?  Here’s a suggested dialog.


You: OK Google.
Phone: Listening.
You: where’s the nearest pizza joint?
Phone:  There’s a Papa John’s two blocks north. Destination on your right.
You: No. I said pizza.
Phone: Oh. Sorry.  There’s a Ray’s Original three blocks south.  Destination on your left.
You: Where’s the nearest trauma center?
Phone: Don’t sweat the small stuff. You won’t need one after I finish with you because when I do, you’ll stay finished.


I’m Wes Richards.  My opinions are my own but you’re welcome to them. ®
Please address comments to wesrichards@gmail.com
© WJR 2016