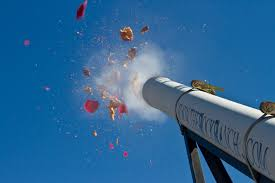 It’s only the first weekday in October and we’re surrounded by pumpkins. Fresh pumpkin, canned pumpkin. And pumpkin flavored ________. You fill in the blank.

It’s not as bad as, say, setting up Christmas displays in August.  Fireworks for the fourth of July in March.  Or back to school fashion week before the present semester ends.

Peterpeter Pumpkineater put his wife in the shell. We could all join her.  Seeing the pumpkin world from the inside might temper our ire.  On the other hand, what the nursery rhyme never got to tell you: Mrs. Pumpkineater charged Peterpeter with spousal abuse, got an order of protection and filed for divorce.

When he violated the order by coming within six vines of her, she shot him dead.  The DA charged her with murder.  The jury ruled it was self defense.  She promptly returned to the shell and set it afire.

Nothing against your hard working neighborhood pumpkin farmer, but maybe ms. Squash as she now calls herself, may have been onto something.

First stop, either Starbucks or Dunkin.  Buy their entire supply of pumpkin spice. Spare your region the horrible fate of nothing but pumpkin coffee.

There’s a pizza joint around the corner.  Each year at this time, they make pumpkin ravioli.  Make them an offer they can’t refuse.

What does this space have against pumpkin?  Nothing. Nothing as long as it’s in moderation.

Roasted pumpkin for dinner with a slice of pumpkin pie a la mode (pumpkin ice cream on top) for dessert.  And when you raid the refrigerator at midnight… leftover pumpkin parmigana -- a gift from the ravioli shop before the fire.

But it’s not just food and drink.  Ever see L’Oreal hair color #R-4P?  Just look at a picture of the president.

And somewhere, Cinderella is riding around in a pumpkin coach.

Today’s Quote:
-“I’m taking a knee on Sunday. I might need someone to help me up.” -- Ed Asner on kneeling at football games via Twitter.

SHRAPNEL:
--Today is October second.  If you forgot to set your calendar watch, it’s September 32nd.  Get to it because 30 days hath September and in a week you’re not going to remember and you’ll get the date wrong.

--Famed non-killer and convicted push-in robber OJ Simpson was freed from jail this past weekend.  In earlier times, we might say “lock up your daughters.” But now we say only “lock up your memorabilia.”

--The Supreme Court opens its fall season today and this one has more than the usual stockpile of important cases.  The court is to vote to either destroy or uphold public employee unions, the right of businesses to choose their customers and the right of  congressmen to choose their voters instead of vice versa.  Keep your eye on Justice Kennedy whose opinion will likely be the tie breaker in all of these.


I’m Wes Richards. My opinions are my own but you’re welcome to them. ®
Please address comments to wesrichards@gmail.com
All sponsored content on this page is parody. And like pumpkins is inexpensive and gluten free.
© WJR 2017