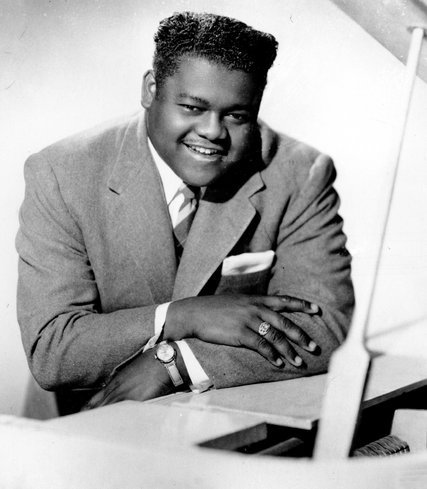 (AP Wirephoto 1956)
What is there about this man that so ingrained him in our minds, hearts and ears for six decades?  Fats Domino. Pounding piano. Big band.  Doghouse bass fiddle.


Happy or sad there was mirth in his baritone; power in his piano.  There was a sameness to each of the songs that were unmistakably his whether a pop standard or an original composition.  It didn’t matter whether he was “walking, yes indeed ...walking” or harvesting on “Blueberry Hill.”


It was that sameness we wanted, we reveled in, we applauded and cheered.


Fats burst onto the national scene at what should have been the absolute wrong time, the mid 1950s when New Orleans jazz piano was fading from memory and rock n roll was just getting started.


But it turned out to be the absolute right time.  He wasn’t a clone of Fats Waller. But he wasn’t a clone of the Doowop Brothers or the “Comets” either.  He was just Fats.  Most of us up north had never heard anything like him and couldn’t wait to start saving for the next record the day we bought the current one (for less than a buck, by the way.)


In 2015 he was performing the same songs he performed in 1955.  Oh, sure, there were new ones, new ones that sold copies in the millions and millions.


And as was the habit in the early days, there were covers by white guys, copies.  When Pat Boone recorded “Ain’t It a Shame” Fats ignored him.  But by the time Ricky Nelson covered “I’m Walkin’” Fats embraced it, performed it live with Nelson.  Never a bad word between the two.  And there was the Blueberry Hill duet with Elvis.


(The registered title of the song is “Ain’t It a Shame,” even though Fats always sang it “Ain’t That a Shame.”)


While he hadn’t a new hit in decades, his draw as a performer never waned.  You booked Fats, you got a full house.  A full house of happy concert goers. And you understood every word despite the molasses- thick NOLA drawl.  Unlike most of today’s “music.”


He got into the news rarely, though. The biggest story about him recently was the drowning of his favorite piano during Hurricane Katrina. Sad. But not fatal. He escaped and reminded us he never went Hollywood or Nashville. Home was home.  We loved that about him too.


It isn’t surprising when a man of 89 passes away. But it’s shocking. Probably, it shouldn’t be. 89 is a long time even by today’s extended standard.  But news of his passing put a hole in more hearts than we could imagine.


As a kid, he delivered ice to homes with ice boxes. As an adult he delivered excitement and warmth to all of America.


OK, enough. What would Fats want us to do?  Let’s party!