4557 Mike's Campaign and his Broadcast Properties 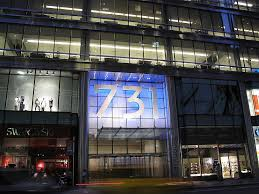 Bloomberg world headquarters boasts open plan office space, fish tanks and a Home Depot in the basement. Honest!
First an update to our tirade about New York’s plastic bag ban.  It was supposed to start on March first, yesterday. Now it’s been postponed to April first, so we can all think it’s an April Fool’s Day joke.  But the real reason is an injunction while opponents and proponents tangle in court.

As a relative old timer, you walk into a new job at a new place with some preconceived notions.  One of them: radio ratings are like crack. No one needs it until the first time. Then, that’s all you need. And you’ll do anything to acquire.

Ratings are the crack of broadcasting.  Everyone says things like “we are presenting a quality product.  We don’t care about ratings.” Or “it’s a niche product” in the case of Mike’s OK sounding radio station.

Except at Bloomberg, when they said they don’t really care about ratings, they actually meant it.  It took me all seven of my years there to find that out.  At one point I told one of the 25 people I reported to that we beat “A Prairie Home Companion” in every US market in which we directly competed. The reaction?  “So what?”

They hired me in Y2K to create, produce and narrate “Bloomberg on the Weekend,” which occupied one percent of their budget but 25% of their air product.  We barely moved the ratings needle either in local or national figures or in satellite versions heard in almost every time zone worldwide.  But we were a resting place for money guys who wanted a little weekend relief from their toils in the salt mines of finance.

But then, there was Mike.  Even 20 years ago he was a big money guy and a sometimes controversial character.  Word from on high: don’t do stuff about Mike.  He was already on the Forbes list of richest people.  (Steve Forbes wasn’t. Mike is not on the list of “Bloomberg Billionaires” either, or wasn’t at latest check.)

We barely covered his first and successful bid for mayor of New York.  Today, the news division pays him little heed as a contestant in the game-show for the Democratic Party presidential nomination. And when we wanted him to do commentary on the radio station and network he owns, we were discouraged and he didn’t.

There’s a new top editor at Bloomberg News.  He’s a former editor of the conservative magazine “The Economist.”  But he’s as good as his predecessor, Matthew Winkler, at avoiding wire articles, TV and radio segments and magazine articles about the guy I labeled our “Maximum Leader.”

And while Mike wallpapers the country with ads, his properties (seem to have) not gotten in on this particular buy.  No ratings to speak of. Why take money out of one pocket to put it in another as GE did when it owned and still paid for advertising on NBC?

Would advertising on his broadcast properties be a conflict of interest?  Let the ethicists beat that horse.  Plus, you see his name 5,000 times a day on BTV and hear it every 12 seconds on the radio.

One of the things multibillionaire Bloomberg says to differentiate himself from sort-of billionaire trump is that he didn’t inherit his money, he made it.  And that’s truthy.  So big a pain in the ass was he at his previous job that they bought out his partnership for $10-million. That was the seed money he turned into about 60 billion. And you should be so lucky and smart to get that kind of return on an investment.

I’m Wes Richards. My opinions are my own but you’re welcome to them. ®
Any questions?  Wesrichards@gmail.com
© WJR 2020