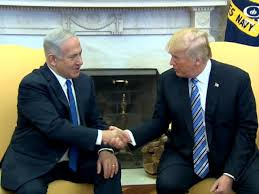 Benjamin Netanyahu, prime minister of Israel, Shalom. You have outlived your usefulness and it’s time to call it a day. You are everything that was wrong with Reagan.  You are almost everything that is wrong with trump.  You are the first Israeli-born prime minister and you don’t seem to understand the country you lead -- a sliver of land surrounded by well armed Arabs who want to push the Jews into the sea.  And you are helping them by expanding settlements in so-called “palestinian” territories and trying to convince Jews worldwide that you are looking out for their interests… which you are not.

Granted, the “palestinians” blew their chance to have an actual country after Britain did what Britain always does: establishing artificial boundaries and creating countries that don’t really exist. Granted that you claim to represent Jews worldwide which you don’t. But it’s time for you to hang it up.

There will be a “two-state solution,” despite your efforts and those of your supporters to kill it.  SuperJews (I am Jewish, but not in any way “super,”) think you are heaven-sent. They harp endlessly about your “American education,” (MIT, Architecture) and your excellent Western clothing.  But they are working in an alternative universe.

Three elections in less than a year?  It’s comical.  But all the stubborn politicians have dug in their heels. And Israel has more parties than you can count.  Ultra-left, ultra-right, moderate left, moderate right religious, secular, Arabist, two staters, one state.  And Netanyahu is under indictment and if convicted could not run the country from the clink.  Or maybe he could.  Doing time gives you a lot of free time and little to do.  He might be able to run the country without the distraction of being Bibi.

Let’s all get into the ring together.  It looks like Wrestlemania.  And there are no referees.

SHRAPNEL:
--The train with Democratic Party presidential candidates reached the station and almost everyone got off. Bloomberg, Warren… the latest to go.  That mostly leaves Bernie and Joe to stay on the train when it leaves.

--We’ve received many requests to mention the Corona Virus. Okay, done.  It’s been mentioned.  Just nothing much to say about it besides wash your hands a lot and don’t kiss strangers even if they’re wearing masks.

I’m Wes Richards.  My opinions are my own but you’re welcome to them. ®
Any questions? Wesrichards@gmail.com
© WJR 2020