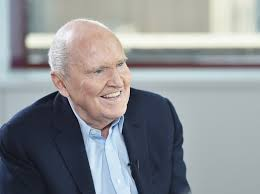 You could make some good bucks betting on Jack Welch when he was head of General Electric, which he turned into The Last Real Conglomerate.  Welch, 84, died of kidney failure at his Manhattan apartment.  He’d been out of the corporate culture since 2001.  And lately, his management style was out of fashion.

You bet on Jack by buying his stock which kept splitting and rising and splitting and rising endlessly in proportion to his opening, closing, buying and selling businesses and at the same time cutting the number of workers in half. Four hundred thousand people dwindled down to about 200-thousand.

That’s where the Neutron Jack thing came from. The neutron bomb kills people but leaves buildings more or less intact. Handy, because a few thousand years after the blast, you can start to decontaminate the irradiated building and the land it sits on, and maybe build a highrise.  Call it Gamma Ray Acres.

He bought RCA.  The rationale was RCA owned so many juicy patents, it could stop making anything and live on the royalties.  Along with that came NBC.  Welch put this Hempstead, Long Island boy

lad, Bob Wright, a GE lawyer in charge.  What Wright knew about broadcasting at the time you could put on the quick start guide for your TV set.  Maybe a matchbook. But he learned.  And fast.  And he turned NBC around from an also ran to a ratings and revenue powerhouse. (Lopping off heads along the way. Less is more? Wright is no hippie or new ager, but since his retirement has been busy in Autism awareness.)

One of the business magazines called Welch the CEO of the century.  Maybe stock tout of the late 20th century would have been truer.

He was a genial fellow.  Smallish.  A ready smile and handshake when not surrounded by linebacker-grade “assistants.”

Today, GE is a shadow of its Welch-era importance.  Blame part of that on market conditions over the years following his retirement in 2001.  But probably without knowing it, Welch was sowing the seeds of that decline even in his prime.

Some people spotted those seeds (ahem!) but no one paid any attention.  Here’s a fine example: In one of his jillion speeches, he called GE “an information company.”  Wrong, Jack.  It is a big company that lends tons of money at good rates, builds things no one can lift and which make horribly loud noises if dropped from the tops of buildings or aircraft flying at almost any altitude.

If that’s what he really thought, he was getting out of touch. Here’s a long term look at the stock price:

Source: Google finance. Recent closing price: $11 and change.
Other than that silly description -- “a communication company” -- and some missteps (selling the NBC Radio Network and letting the acquiring company keep the name; naming his own successor at GE, someone who couldn’t or wouldn’t keep the company on track,) he was the template for his era.

That’s a description, not a compliment. And it raises questions about “his era.”  Maybe it and not Welch was the neutron bomb.

I’m Wes Richards. My opinions are my own but you’re welcome to them. ®
Any questions? Wesrichards@gmail.com
© WJR 2020