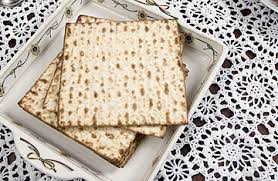 4573 Passover, then Easter
Matzo. Unleavened bread and central to Passover observance. The best-known manufacturer has patented a process that makes it come out of the oven already stale.  But eating lots of it is good for reducing the number of bathroom breaks you need during the toilet paper shortage.

The Jewish festival Passover starts at sundown tonight. For many, the first seder, a ritual meal that seems to last for all eight days, is the most important.  But there are seven more to come.  It’s a home holiday. So there will be no crowds at houses of worship.  But in some homes, three’s a crowd.

Then comes Easter.  To many, the most important holy day in the Christian calendar.  It is not a home observance.  Many gather outdoors at sunrise.  Many attend church and hang out if the weather’s good.

The fever-fervent will pack their megachurches.  And if half or more contract the Covfefe Virus, Pat Robertson will tell us God saved the ones who survived

This is not a good year to do all that.  Recall, if you will, that Pope Francis conducted Good Friday observance without the usual throng in St. Peter’s Square.

In Israel, once considered a Jewish state, the prime minister, Benjamin “I am not a crook” Netanyahu tells people to have their celebrations with in-house family members.  Does that mean you’ll one-up Chekov and successfully assassinate Uncle Vanya who is visiting from Pripyat, Belarus?  He so wanted to be there with you. And he’s been declared decontaminated after Chernobyl but not Coronavirus free.  Plus Yeltsin’s Geiger counters were made in Wuhan before any westerners ever heard of it.

(All Over) -- In a surprising development many people seem to be following advice and keeping their distance from each other and generally being polite.  Maybe it’s just that all the cranks are staying home.

(HARRISBURG, PA) -- The Pennsylvania trout season opens today, a week earlier than usual. Fishermen and women have no trouble with social distancing and have great practice in staying at least six feet away from any trout.

(ANAHEIM, CA) -- The Walt Disney Company says its ESPN ratings are circling the drain and its theme parks are closed. But there is a bright spot, their ABC “World News Tonight” has gained in ratings as have the NBC and CBS equivalents.

(SANDPOINT, IDAHO) -- And of course… there’s the Give Me Liberty over-armed hippies of the right who say they’ll defend to their deaths their right to defy the governor’s social distancing order. Lawful assembly as population control.  Wait up, fellas. How to you cite the constitution of a country that you say has no right to govern you.

(THE INTERNET) -- If you can’t find a facemask, don’t fret. There are a zillion DIY projects on the internet using everything handy including paper towels, diapers, scarves and t-shirts.

I’m Wes Richards. My opinions are my own but you’re welcome to them. ®
Any questions: wesrichards@gmail.com
© WJR 2020