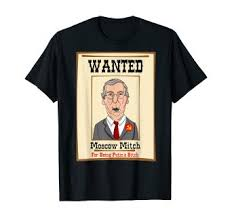 This guy could teach Capone and Gotti a thing or two.  If it weren’t for Rich Mitch, the trumps would be just another bunch of hoods in the hood.

Is it really that bad?  Sure. The virus is killing people left right and center.  And when money flows -- and it has been and is -- the underworlders always get their cut.  And as in other organized crime syndicates, the payoffs flow upward.  Trickle-up economics.

With guys like Luciano and El Chapo, you had a good idea who was calling the shots even if you couldn’t prove it.  With the McConnell people, most everything is done openly. They get up on television and give speeches.  And then, the Bosses send their leg breakers out.  Or they could if they had to.  But their malfeasance means they never have to put that Garrote around Luca Brasi’s neck.
Nice clean elimination. They don’t need to pay off some gunsel, the virus. This gunsel works for nothing.  And you can’t see him until he gets into your lungs.

Where is Preet Bharara when we need him most.  Or Jack McCoy.

TODAY’S QUOTE:
“We're not getting the truth. I know over the years, going back to the 1950s, with the atomic bomb, don't worry about more testing in Nevada. You'll all be fine. Take a shower." -- Mayor Carolyn Goodman of Las Vegas saying it’s time to reopen the casinos. (CNN Anderson Cooper interview.)

(ATLANTA) -- In his pell mell campaign to be a “made man,” Georgia Governor Brian Kemp is putting more people on the street; opening up the state.  Godfather trump has signaled his disapproval.  Watch your back, Brian.

(NEW YORK) -- The streets are still empty. The hospitals remain overloaded. The people who work there are still exhausted; running on fumes.

(NEW ROSES, PA) -- The local exploding ego-charity that masquerades as a hospital is having fun basking in the spotlight while its doctors, nurses, aides, orderlies and schedule keepers sweat blood.

(MINNEAPOLIS) -- Associates at Mega Retailer Target (NYSE: TGT) are planning a “sick out” on May 1.  According to their employee association, Target Workers Unite, “foot traffic and ‘guests’ behavior has been atrocious and conditions are unsafe.

(TOKYO) -- After promising every family two masks, the government of Japan has issued a recall.  A lot of them were dirty.  Some shrank in the wash.

(A SOUTHERN STATE) -- One observer thinks humans may be the disease and the virus is the planet’s immune system in action.

I’m Wes Richards. My opinions are my own but you’re welcome to them. ®
Any questions?  wesrichards@gmail.com
© WJR 2020