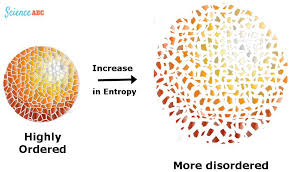 This post contains material that some people may find offensive. Reader discretion is advised.

We’re seeing entropy, the gradual reorganization of what we know at the elemental level.  Some of the devout believe the “end times” are at hand. They’ve been saying that for centuries. They may not be entirely wrong.

Book that cruise to the Entropics.  You may never again see a swaying palm tree, an authentic Hula dancer or a championship surfer disintegrate like a Chuppa glass at a Jewish wedding.

But it’s not the will and whim of some guy in the sky. It’s a fact of physics. Reorganization does not mean the hand of some deity is teaching us a lesson. It’s just nature doing what nature does. Things wind down.

A good example:  A campfire -- or, for that matter -- an insurance fire at your virus-bankrupt restaurant.  If left to its own devices, the campfire will burn itself out.  The insurance fire may or may not.  It could set the rest of the block afire.  But that’s another story for another day.

Chaos theory teaches us by using the example of a burning cigarette in an ashtray. It shows a stem of smoke rising. The stem expands into a cloud and eventually seems to disappear.  But it doesn’t. It blends into the atmosphere. It transforms, probably back into its component parts. You can’t see it afterward. But it’s still there.

Is there social entropy?  In a sense yes although it’s a slow process. The ghetto thug and the redneck thug are examples. We haven’t gotten to the pitchfork, cross burning and looting phase yet.  But it’s not that far off.

It may be that climate change… an example of something between entropy and chaos… will do us in before we’re all forced back into the cave.

Please remember that “The Flintstones” TV show was a parody of prehistoric times (and Jack Gleason) and not a realistic view of the way things worked at around the time God went on a tear and created this whole mess in six days.

(SAN LUIS OBISPO CA) -- Tara Reade told her ex-husband of “sexual harassment” from Joe Biden in the 1990s.  It’s in their divorce filings. At that point it was personal. And awful. At this time, it can be translated into this: My feelings about my treatment by Joe Biden 30 years ago are more important than defeating trump -- and America’s future in November.

(COMMACK NY) -- The owner of a strip club is suing NY Governor Cuomo because he was forced to shut down during the pandemic.

(SKY CASTLE CA) -- Elan Musk is restarting the Tesla factory and risks going to jail. No worries. The company isn’t all that good about meeting production goals.

(POGO GA) -- “Doctor” Bo Eustace has performed what he says is the first successful engine transplant on a Tesla.  “I gave that pretty baby a nice a Dodge Slant Six from the 70s I’d been rebuilding. Runs like a top.  Good gas mileage but a little noisier than the original.”

(NEW YORK) -- The comic actor Jerry Stiller has died at age 92. He was best known in recent years from a supporting role on the TV show “Seinfeld.” Earlier, he and his wife Anne Meara were a star-level comedy act.

TODAY’S QUOTE:
“Stiller and Meara are the best Mr. and Mrs. Comedy duo since Burns and Allen.”  -- George Burns

I’m Wes Richards.  My opinions are my own but you’re welcome to them. ®
Any questions? wesrichards@gmail.com
© WJR 2020