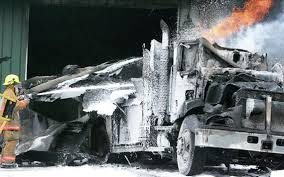 Burning fire truck?  It’s not in the west, it’s in a state known for cool temperatures.

The fire truck is on fire.  It’s totaled. Not even good for scrap now.

You’d think this would be in the middle of all that’s burning on the West Coast but it isn’t. It’s in a state known for cool temperatures and usually, cool heads.  But it’s a symbol of our times.

It brings together a few big ideas: Climate change which wasn’t the cause here, but it’s a big contributor to fires in the west, in Brazil’s Amazon, in Greece. And it is a picture of the vehicle that is supposed to save lives, not self-consume.

The “president,” tells Bob Woodward, didn’t want us to panic so he minimized all he knew about COVID19. Because of this, we panicked. He wanted to wish it away.  The mermaid, the genie and all the other dispensers of wish fulfillment were nowhere to be found. The genie stayed in the bottle. The mermaid couldn’t swim to shore. She was blinded by an oil spill and had insufficient tail power to swim through all the plastic waste.

Also on fire: the Constitution.  While your congressman was attending a 2nd Amendment rally, your senators were deadlocked over some obscure point of law and sitting on their hands.  Your Supreme Court justices were waiting for the best among them to die. The fire truck turned to ashes.

We need new equipment.  American LaFrance (1873-2014) is gone. Someone please put “fire truck” into a search block and click on “shopping.”

You know who to vote against.

(SUMMERVILLE SC) -- Do you want to know what happened to the American LaFrance factory? First, the original owners sold out to a private equity fund. The fund then sold the plant to Daimler. Daimler eventually used it to produce the Dodge Sprinter, a passenger and cargo van. They stopped production in 2009.

TODAY’S QUOTE: “Please put the shower curtain inside the tub.” -- attributed to Conrad Hilton when asked what he’d like to tell all the guests at his hotels.