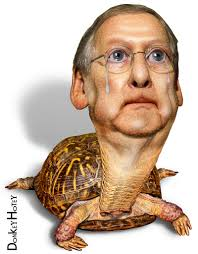 The body wasn’t even cold when McConnell start to make good his promise.  Ruth Bader Ginsberg died last Friday.  And the so-called senate leader, McConnell pledged to hold a vote on her replacement before the end of his iron grip on the Robotican Party.

Do you need a reminder about similar circumstances that arose in the waning months of the Obama administration? When McConnell wouldn’t allow so much as a hearing on possible confirmation of Merrick Garland.

Do you remember him saying that close to an election day the American people should have the right to pick their next Supreme Court Justice?  Do you remember old reliable Lindsey Graham saying pretty much the same thing? That was in February, nine months before the election. This is only a few weeks ahead.

Fortunately, Mitch, there are some longer memories than yours, even within the Robotican Party.  And some of them will have the stones to try and block the vote you promised to hold before election day.

Of course, there’s a wide-open window between election day and inauguration day.  And that’s another chance for you to work your magical thinking.  But maybe not your magical doing.

What else is magical? The actions of your fellow Roboticans if they win re-election and still won’t vote your way.

Meantime, the “president” has put forth a prefab roster of possible appointees.  We note with interest that Senator Cruz wasn’t on the short list.  The conman-in-chief wasn’t even wise enough to add his name near the top of the if only for the sake of the reality TV show he’s running.

There’s likely to be a nominee this week. The “president” says it’s going to be a woman.  He has -- like Romney had back in the day -- a “portfolio of women.”

It’s a small portfolio.  They range from embraces of arch conservatism in the trump way to Qanoons who think George Washington was a Communist.

Our guess is his choice will be the one whose … um … private parts trump would most like to grab.

Someone try to find out whether Simon Cowell or Jeff Zucker will work as consultants.  They know how to build suspense on reality television.

As for your own future, Senator Sonofabatch, the polls say there’s an outside chance you can’t buy your way into another term. Poll results are always flighty, so no one is writing you off.  But as you’ve come to learn, sometimes totally unexpected things happen in the voting booth.  Send the Mrs. out to supervise the kidnapping of mail boxes.

QUOTES OF THE DAY: “The American people should have a choice in the selection of the next Supreme Court Justice. Therefore, this vacancy should not be filled until we have a new president…” -- Mitch McConnell 2-13-16

“President trump’s nominee will receive a vote on the floor of the United States Senate.” -- Mitch McConnell 9/18/2020