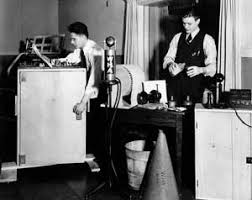 Old time radio sound effects men. Need hoofbeats?  A creaking door? A gunshot? A thunderstorm or howling wind? This is what went on behind the scenes.

This is an experimental interactive Wessay™.  It’s to help you watch pre-election television, become your own executive producer and cable news talking head.

Context: In the early days of TV comedy, they used “laugh tracks” to aurally decorate where they wanted you to laugh.  The theory says if you hear laughter, you’ll laugh along.  It worked pretty well for a long time.

We need to revive the practice.  Not for TV comedy, but for TV politics.

Now, the interactive part.  Here is the results page from a Google search for Audience Reaction Sound Effects and if it doesn’t show properly, you can do your own by using the same search term.

What you will find is laughter, applause, cheers, jeers, boos, shock, awe, love, hate, and every other reaction. You will find catfights, howling dogs and wolves, trumpeting elephants, rimshots, explosions, tornadoes at play and the hoofbeats of a cattle riot.

From this collection, you can make your own playlist, put it on your iPhone, turn on Fox News and fill your room with laughter.  It may lighten your mood but it won’t do much good…

Unless.  Unless you spread the idea, with or without the medium-tech tools now at your disposal.

Make trump into the joke he is.

When the “president” speaks about his fake accomplishments, don’t get mad. Don’t get even. Get laughing.  It’s not going to change him. But maybe it will change those he depends on for his dictatorship of the reality show. And you can spread the practice to members of your own social circle.

Each one teach one?  That often works. This is a variation of that. And there’s a nice little irony in this fire.  The concept of weaponized laughter first came to the attention of many when it was written about extensively by the Grandma of Modern Fake Conservativism, Ayn Rand.  Not that she was a big fan of people like Nixon and Reagan. To paraphrase: “laugh them out of the house.”

Notes From All Over:

(NEW YORK) -- the NY Times has started a series of articles about trump’s taxes, something we’ll eventually deal with here in detail. Summary in a sentence:  If you did what he did when and how he did it, you would already be eligible for parole.

(WASHINGTON) -- The race is on and Amy Coney Barrett will win because she’s running the track alone. We can’t wait for the swearing in as associate justice of the Supreme Court, and her first opinion written in tongues.