4643 A Merry Band of Terrorists 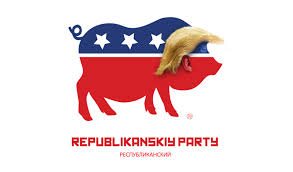 Not only does the Robopublican Party bring new meaning to the phrase “artificial intelligence,” but it should be ruled a terrorist organization.  It plunders the poor to serve the rich. It destroys roads and bridges with neglect. It strikes fear in the hearts of any rational being and it does it with the grace and precision of a volcano and the stink of a tire fire.

It poisons the air, the water and the people.  And then it feeds us more poison, branded as a cure.  The only difference between this mob and Iran’s Baath Party: Saddam Hussein kept most of his domestic terrorism at home.  The Republicans spread ours worldwide.

We have agencies that are supposed to protect us.  In the trump era, we have regulators drafted into service from the industries they're tasked with regulating.  We have a secretary of Education who opposes public schools and favors blood-sucking private colleges.

We have a secretary of Housing whose biggest accomplishments are being black and conservative and whose second greatest asset is his taste in redecorating his offices.

OSHA?  That's the outfit with 100,000,000 businesses and nonprofits to cover with 100 inspectors and a budget the size of your Ball Jar for loose change.

The CDC, the FDA, the SEC?  Every day’s a holiday for the top guys whose credentials and qualifications are diminutive and their underlings work under the awful distortion that their real abilities count.

And this food fight about a replacement for Ruth Bader Ginsburg? It’s really not about the Supreme Court, exactly.  Yes, trump would like to put yet another thug on the bench.  A lifetime appointment will make the court his own even if he loses the election (again.)

This is about getting rid of Obamacare.  This is to take affordable health care away from those poor people who aren’t smart enough or hard working enough or blessed enough or lucky enough to buy their own.  It’s to further reduce the population beset with preexisting conditions.  It’s probably even more effective population control than ignoring COVID 19 as long as they did.

And, of course, a trump court will say to women “We want your body. Forget Roe v. Wade.”

Oh, but the economy, they’ll tell us, is in great shape.  They’ll say “look at the stock market?” They can’t see the bubble. They can’t see that all of the upticks are from institutional trade and that the Gallup Poll says 55 percent of us own stock.  The 148 million others -- the rest of us -- are still too busy trying to make ends meet to play at the stock exchange casinos.  Those realize that exchanges are casinos without the rules that keep criminals out of the real gaming industry.

--It’s time to re-read George Orwell’s “Animal Farm” because members of the pigs’ leadership are back in the barn learning to walk on their hind legs.