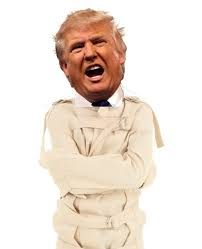 The “president” isn’t committed.  There are, of course, people who believe he should be. But that’s not what this is about.  Just when you think trump can’t cross another line, he does.  This time is he’s “not committed” to a peaceful transition of power at the end of his term.

This is one of his magical talking blurts that even he realizes is idiotic and sorta-kinda backpeddles by saying “throw away the ballots. They won’t mean anything…” Um… in the twisted world of trump, that’s an explanation.  Then he offers an explanation of the explanation by saying he meant that there won’t need to be a transition of any kind, that his first term will be followed not by Joe Biden’s inauguration but by a “continuation.”

Oh, okay. That explains… um… something.

Don’t be taken in.  The guy could be toast.  Oh, he’ll cry foul. He’ll cry “fixed.” Don’t laugh. Assume he really thinks that. President for life?

Believe that he’ll fight to remain in office. Do not overestimate the power of belief.  Don’t respond to trump by saying “oh, he can’t really do that,” whichever “that” he does next.  Shrugging him off is capitulating. Enough of that, and trump could be right when he says he’ll win.

TODAY’S QUOTE: “trump may be behaving like a strongman, but he is weaker than he’d like us all to believe. Autocrats who actually have the power to fix elections don’t announce their plans to do it; they just pretend to have gotten 99 percent of the vote.” -- Columnist Michelle Goldberg in the NY Times, 9/24/2020

-They’ve already removed sharp corners and doors from the Oval Office, and now should ensure the “president’s” safety by installing oval padding.

-Maybe it’s a movie prop, but there are rumors that a van marked “St. Elizabeth’s Hospital” and carrying white-coated workers with enormous butterfly nets has been parked near 1600 Pennsylvania Avenue.

(HOLLYWOOD) -- They’re making or have made a miniseries about former FBI chief James Comey and they needed a tall actor to play the part so they chose Jeff Daniels who is 6’3”.  The actual Comey -- the real-life one, is 6’8”.  Can’t wait to see Daniels in five inch heels.

(WASHINGTON) -- Dr. Fauci finally got fed up with Rand Paul and lost his temper at a hearing and told Kentucky’s Other Would be Dictator “you’re not listening” to the truth about how New York State realized in was screwing up and changed its ways, and now is the least likely state in which one can expect to contract COVID 19.  Fauci’s was not an epic blowup, but you could see the red rising in his face when he spoke.

(SEATTLE) -- A protester is lying on the ground at a demonstration. A cop is walking his bicycle toward the demonstrator… then rolls the bike over his head and neck.  The officer has been suspended pending the outcome of the investigation.  Any guesses about how this investigation will end?