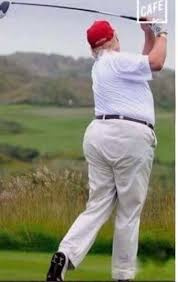 You love him. You cheer him on as he steals America’s lunch each day.  You laugh with him as he corners his enemies with hurtful and hateful words, actions and failures to act.  You laugh with him at the “losers” like fallen soldiers, the sick, the poor, the brown and the lame.  And you will continue until the day he comes for you. And mark these words, he WILL come for you.  Even if you’re white, angry, were born in the lower 48 and speak english exclusively.

The bully is insatiable and peripatetic. He may be obese, slovenly and brutish, but he has the energy of a dozen and the surgical precision of a coal mine collapse or an avalanche. He feeds his insecurities by playing into ours.  He feeds his power lust by diminishing everything in his path.  And he switches paths as fast and as often as some of us roll past stop signs.

His appetites are prodigious. He is a glutton and people are just the appetizer.  Four years ago, you had and blew the opportunity to just say no.  That didn’t work too well for Nancy Reagan’s drug abuse solution either.  But in the 2016 election, all you had to do is vote.  Especially if you live in one of the Super States with overwhelming numbers of electors.

If you accuse me of blaming the victim, you’re right -- to an extent. There were more than enough votes to put the less but still nauseous and nauseating Hillary Clinton into office.  As a nation, we did that.

As a nation we seem poised to go for Biden. But the only way our votes to the right to retain our own lunch bags can count is if we’re joined by enough people in those Super States.  Do you live in one?  Do you have friends or relatives or colleagues in one -- or more?  Pick up the telephone and share your thoughts.  Write a letter (if the post office is still delivering mail by the time you get to it.) Write an email. Send a fax.  Something.

The Bully has bullied us into the world’s laughing stock.  He has cornered us and we stand and tremble. He has bullied the once-adequate Republican Party into submission and put campaign interns, contributors, and all manner of thieves, incompetents and sycophants into positions to control our lives.

It’s up to us to face down The Bully.  What do you have in that brown bag, donald?  Probably a Big Mac.  Or maybe Melania made you a symbolic sandwich: Bologna and store-brand American Cheese on White.

For the rest of us, as Marx and Engles said, you have nothing to lose but your chains.

Today’s Quote: “Treason against the United States, shall consist only in levying war against them, or in adhering to their enemies, giving them aid and comfort. No person shall be convicted of treason unless on the testimony of two witnesses to the same overt act, or on confession in open court.” United States Constituion, Article 3, Section 3.

Major world power seeks witnesses willing to testify in a treason case.  Must be able to travel to the country’s Capital at their own expense.  Compensation and benefits based on candidate’s credibility.  High school diploma or GED or higher preferred. Must be at least 18 years of age.  BOX 276 Milton, DE 19968. Equal Opportunity employer. Minorities and women encouraged to apply.