4650 Wessays Believe it or Not 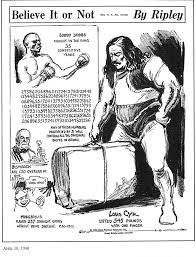 We live In a world that treats fiction as truth and truth as fiction, fantasy as fact and fact as fantasy… where the grotesque is normal,  where instead of painting distended clocks, Salvatore Dali could have painted melting iPhones and where Franz Kafka characters spring to life from the pages of the daily paper and the b-roll of the Nightly News.

Move over, Robert Ripley, your pen and ink freak show, creepy museum and cheap TV program no longer startle, amuse or entertain. “Believe it or Not” has become the template for real life.

Let’s go back to one of the grandfathers of the world of living Mobius strips, Franz Kafka.  The writer Kafka’s characters and situations were so confused and confusing that we’ve co-opted his name to describe present day America. Kafkaism.

One of his best-known stories, “Metamorphosis,” is about a guy who wakes up one morning to realize that he is now no longer human but has turned into a giant insect.  The story was later made into a movie called “the Fly,” but which could more accurately be called “Metamorphosis for Dummies.”

So when what appeared to be an ordinary house fly landed in the hair of vice president Pence during the televised debate with Kamala Harris Wednesday, conspiracy theorists, the neo-phrophets of the 21st Century started to build some kind of… well… futuristic view of next week.

Pence’s Clairol white hair provided a stark visual contrast and diverted attention from Vice President Smarm’s hypocritical and truth-free on-stage meanderings, mutterings and lies.  Of course, it is possible that a similar bug may have landed on Sen. Harris’ head.  But if it did, it blended with her hair color and thus was invisible. Probably not.

The following morning, no one awoke having turned into a giant insect.  But the fly had symbolic value.  Maybe Pence once was a fly who awoke some years back in the form of an empty suit.  Maybe the house fly was a jilted lover trying to get back to her… or his mate.  Or maybe it was just a common house fly, attracted to … um … the excrement that attracts every house fly.

Harris was a sharp-edged prosecutor, once.  You’d think that she’d have taken a flyswatter to the vice president.  Or at least a strip of flypaper.  But no. She let him do to him what trump did to Biden in their first debate.

Biden was un- flustered by the motor mouthed trump. In fact, the rudeness worked in Biden's favor.  Nor did Pence’s holier than thou non-stoppery seem to throw Harris off her game. But now, it’s gotten serious.

We call the presidential crap show a “first debate,” because that’s what it was supposed to be.  At this writing we’re not sure there’s going to be a second. The “president” was rankled because the debate sponsors wanted to make the next meeting virtual, to guard against his infecting everyone else in the room.  Maybe there won’t be Debate 2.0.

Or maybe it’ll be postponed.  Or something.

So who won the Wednesday night talk fest?  You have to ask?

OBITS FROM ALL OVER:

(FRANKLIN TN) -- Lyon Gardner Tylor, Jr. has died.  Tyler was a lawyer, was 95 years old and had Alzheimer’s. Unfortunate, but not unexpected or unusual.  Oh, also, he was a grandson of John Tyler, the 10th President of the United States. John Tyler? Whose presidency ran from 1841 to 1845.  Thirty-five presidents ago?  Lyon Tylor was not a great great grandson or a great grandson. He was a grandson, of a guy whose folks hung out with Thomas Jefferson!

(NEW YORK) -- To paraphrase the words quoted in his “official” obituary: Jim Dwyer picked a fine day to lose his battle with cancer. It was, he might continue, a brisk sunny autumn day at Sloan-Kettering where they treat cancer and sometimes kill it before it kills you. Dwyer was a reporter’s reporter and he wrote something like that for the Fordham University student Newspaper tens of thousands of inches of print ago.  From the pages of the Fordham Ram to those of the New York Daily News and Newsday, and finally, the New York Times Dwyer told stories of extraordinary things that happened to ordinary people. He was 69 years old. And he was anything but ordinary.