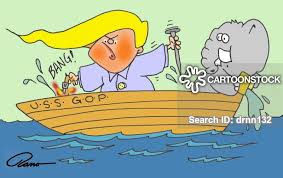 Where is the outrage?  When the government bailed out the big automakers and the enormous banks during the recession, the conservatives, usually listing to port, went apoplectic. Now, we find out from the New York Times that trump got his own bailout and the conservatives are listing to starboard.  Move along, folks, no apoplexy here. Nothing to see.

Sometimes, bailouts are built in to the way we’re governed. The Federal Deposit Insurance Corporation is a good case in point.  Remember the Keating Five and the S&L scandal?  Federal regulators took over the crooked institutions, plugged some of the holes in the hulls and then set them loose to be… well, S&Ls.

The right thing to do.  It’s regular peoples’ money that was under attack and then, mostly returned to its rightful depositors.

Remember Lee Iacocca?  He got the government to guarantee loans of the perpetually at the brink of doom Chrysler Corporation.  The government stood ready to repay lenders from Lee’s mistakes. This caused one of those apoplectic fender benders except for one thing.

Iacocca used the private loans pronto, then paid them back.  In advance. Those mistakes everyone expected him to make?  Well, he didn’t. The government’s only expense in that case was the overpriced paperwork in which it likes it drowns itself and the rest of us.

In the early 2000s recession, two of the big 2.5 auto companies were completely reborn.  And a lot of investors, employees and unions, captive subsidiaries and dependent small businesses and their employees were or might have been at injured.  It had to be done. And it cost big bucks. But the situation ended right.

Now, to today.  Take the federal and state tax codes. If you put them end to end, they’d reach from hell to Pluto.  It’s like a Victorian house. Too many rooms. Impossible to comprehend.  And full of leaks.  So it’s only natural that our big time scam artists widen the leaks to crawl in and out, and often the result is the taxation version of Escape From Alcatraz.

Who can’t find water in a swamp, but is better at finding loops than riders of Kingda Ka, the country’s tallest roller coaster situated at Six Flags in Jackson Township, New Jersey.

Water on the high seas. Water in the Gobi, loops in Jersey, air coming through the walls of your house.  There hasn’t ever been anyone better than trump and finding and exploiting.  But what’s happened is that we -- you and I -- have been buying this guy’s con for decades and bailing him out, straightening his loopiness, sealing his leaks even as he creates or discovers new ones.

The NY Times’ series about finding these leaks and exposing them tells us of some of the specifics. There’s no overarching concept here that we didn’t already know about.  But now, you can see some of -- maybe most of it -- in plain if not overwritten and over-cautious black and white.

Now is your chance to stop it -- or at barring it from continuing.  It’s easy. Get his hand out of your pocket and purse.  And Lock Him Up.

(WASHINGTON) -- trump and first lady Melanoma have tested positive for Covfefe Virus.  Awww! That’s such a shame.  Now trumps will have to stay home for a couple of weeks.  It’s going to be the best confinement ever. Really.

(WASHINGTON) -- How many tell-all books does it take to change a president?  More than it should.  The latest is about first lady Pontoona Balloona who says she “works her ass off” and asks “who gives a f*ck about Christmas decorations?” Answers: Well, don’t look back, Pontoona.  Your ass is still its foam-filled self and as for who cares about Christmas? Everyone.

My opinions are my own but you’re welcome to them. ®