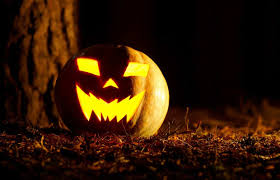 (FLYOVER PA) -- Let’s take a break from weeks of trivial nonsense about the election and talk about something of Great Importance that has gone underreported in recent days, Halloween.

That’s when costumed children are tasked with dressing up as someone they aren’t and go door to door panhandling for unhealthy food which their parents then have to either ration or -- if they’re clever -- steal from their children and consume in secret, all the while acting in the name of wellness, discipline and caring.

Halloween takes place on the last day of the month of October.  Except here, where it is a floating holiday.  This year it is floating with less than the usual focus.

The last day of October 2020 is tomorrow, Saturday. But there are factors that rule against celebrating the day.  First, there’s a college football game scheduled in town.

There weren’t and aren’t seats available in the stadium.  COVID-19 19 killed that, even for season ticket holders and the scalpers who love them.  One-hundred-seven-thousand empty seats.  They think big in this little town. Of course, the faithful will pour into the no-business district by the thousands so they can tailgate in bars that are essentially operating on fumes in the tank.

Even in normal times, “we” schedule trick or treating on an off day.  This year it was supposed to be yesterday, Thursday the 29th.

At the last moment, the local gods of fake holidays got together and decided that the weather was going to be bad and re-rescheduled the original reschedule for either tomorrow (the actual day!) or Sunday, depending on which part of town you and your little scavengers live.

“Oh,” you might be saying “what about that football game?” Doesn't it still matter? Well -- these are unpredictable times, so let’s forget about the thundering herd or swarm of barflies.  But Sunday? Father McGinty and Rev. Benson are likely to object. (Rabbi Shmuley wasn’t nuts about the Saturday date either, but his congregation has only nine members, so no big deal. Plus it gives him job-protecting incentive to show up at work instead of social distancing on the golf course which is where he’d rather be.)  We can deal with Father M and Rev. B later. They’re wimps. They won’t put up that much of a fight.

Normally, even though we live on a drive-past street in a flyover town and rarely get any of the little begging kids, we stock up on candy, usually something I wouldn’t eat on a bet so I don’t touch the leftovers of which there normally are many. But there’s a solid and clinically proven fact: demands change to meet the available supply. Be smart. Bet against me.