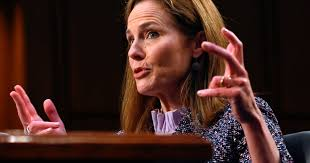 Amy Coney Barrett, lioness of the law, ready to spring and sink her teeth into dinner for her cubs. Not pictured: her target, you.

With apologies to Pigmeat Markham, Sammy Davis Jr., Rowan and Martin, Judy Sheindlin and most of all, to Ruth Bader Ginsberg.

I don’t know about you, but I like to get kissed a little before I get screwed.  You know… a little foreplay before the main event.  Not this time. Amy Coney Barrett rode the express train wreck to Supreme Court stardom.

Let’s get polite.  Associate Justice Barrett is no dummy.  She’s not Einstein, but she’s not in the subnormal IQ category so common among politicians and other public figures these days, either.  And she is driven.

She’s put herself in a cult of pseudochristians that believes you must believe.  She has put herself in the service of big money and bad ideas.  And she’s going to upset the applecart.

It’s nice to have an attractive articulate associate justice on the bench.  America loves attractive people who speak in short sentences and tell us what we want to hear.

In her mind it’s likely she expects to be known as one of history’s great advocates of freedom.  She will be the one to expand equal rights under the law to blobs of protoplasm residing in the wombs of women across the land.  At last, they will have the same rights as you and I.  And probably more polished legal representation in court. And more access to it.

But it’s not just abortion rights. Soon, the country will declare English as the official language, Evangelical Christianity as the official faith and gun ownership as a human right, granted to any random crazy along with the benefit of the doubt -- and to no driver of a motor vehicle.

And then there’s the matter of citizenship levels. We all know there’s a caste system in this country, something we learned from the moral and intellectual enforcers in India.  But our system is inferior because it's unofficial and not closely monitored.  And there’s no official block against inter-caste mobility.

But best of all, we’ll see laws that nominally protect against racist cops and neo-Nazi hatemongers will get the recognition and preferential treatment they so long for.

It’s going to be paradise, people, just you wait and see.

Can one of nine justices cause such radical “improvement?”  Yes.  There’s no RBG to put the brakes on. The three remaining so-called liberals are babes in the woods, and newly disempowered.  They don’t even have to show up for work and engage in the heavy lifting of dissent.

When every winning opinion is a slam dunk, the opposing team needn’t bother showing up.

This is not a sudden change.  The underpinnings have been under construction for a long time.  The lower courts have been stocked with right wingers like a recreational fishing pond. Those fish are born to die. So are legal opinions of the Non-McConnell kind.