4651 The Crystal Ball is Cloudy 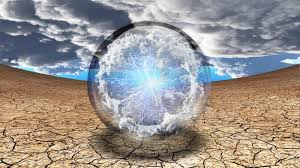 When you gather ‘round the seance table and the lady in the tie dyed died bathrobe and the turban gazes intensely at the crystal ball while she tries to think up an answer to an unanswerable question, she’ll ultimately close her eyes, sigh deeply and say in a disappointed tone “The Crystal Ball is Cloudy.”

That’s right out of Seance 101 as taught in Famous Mediums School of Sorcery. Don’t believe her.  You can see for yourself it’s clear as … um …  crystal.

It’s a useful tool that can keep the enthralled coming for more. But when you’re a news reporter, you can’t just say something like that. You must fill the column inches or the designated air time. And these days, it’s much harder in a podcast/dronecast than it would be in an 800 word column or even a 2:35 TV package.

Political reporters have it tougher than most.  When you cover police headquarters and someone goes missing or a passerby discovers a body in a stairwell or a landfill, things are pretty simple. They take steps to solve the crime if it actually is a crime. You report the steps, usually ending in the arrest and trial of a spouse or a jilted lover or a loan shark’s designated knee-breaker.

If they drop you into a war zone, you find who is killing who and maybe why.  You report it.

You cover horse racing, you know who the winner is and how he-she-it got there, and which horses followed and in what order.  You interview the jockey and the trainer and the owner.  Beginning, middle, end.  And end of story.

You cover the election and you’re dealing with vapor, lies, greed, hunger and wild speculation.  And in today’s world of perpetual campaigning there’s always more vapor as you crystal ball gaze with the winner, the loser and the umpteen members of the campaign team.

At this writing trump looks sure to be dumped.  There’s a constant barrage of stories about how he screwed up the Coronavirus affair that has all but shut the country down.  There’s his steroid-pumped response to contracting it, and his foolish trip outside the hospital to absorb the waves of worship from his acolytes.

There’s his pinball machine approach to a stimulus bill.  There’s his foolhardy choice for Associate Justice of the Supreme Court. Also his revolving door cabinet and staff.  Oh, and his crooked son in law and general fixer, Kushner and his questionable relationship with his pneumatically enhanced daughter.

There’s grabbing women by the p***y.  And Stormy Daniels.  And watching hookers turning a Moscow hotel room into a ladies bathroom.

There are his tax problems.  There are the lies, endless and volcanic.  In a world which at least paid lip service to logic, who would vote for this vicious dolt?  No one.

But we know that’s not the case.

Everyone (else) “knows” he’s going down hard.  But if there’s anyone who can fix an election, it’s this guy.

And then there are the polls.  Can you believe that the margin of defeat is as slim as it is in some locales?  Come to think of it, can you believe anything people tell pollsters and what the pollsters do to the figures before presenting them to us?

All smoke.  And fog. And miscalculation. You want to report on that stuff?  Get a pseudonym because real people will remember how you screwed up the story even if you didn’t mean to.

Me?  Give me an old fashioned plane crash.  A bank robbery.  A rubber chicken charity dinner.  I can help you understand that stuff because I can understand it. And neither of us will need a crystal ball, cloudy or clear.