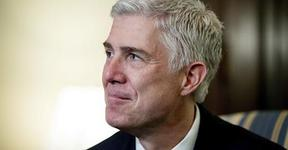 
They haze new pledges at that fraternity.  Example: the newest member is forced to hold the door while the other justices parade solemnly in and out of the courtroom.  So, newbie as doorman and they don’t even give him a uniform other than a plain black robe.


And if you think working for the Supreme Court is just dressing up like an undergrad and pontificating from bench and back office, think again.


Gorsuch has been named to the court’s prestigious Cafeteria Committee.  And for a guy like Neil, this is going to mean a lot of research, leaving him barely enough time to help his fellow frat brothers and sorority sisters to freeze stranded truck drivers or ban aborting a fetus over 20 minutes old.


Why?  Because it is the job of the Cafeteria Committee to choose the menu.  Yes, a guy with no training is in charge of the workday nutrition.  Not to worry.  Gorsuch is a quick study. Plus there aren’t all that many work days in his trade.


Here’s the problem.  As a literalist, Gorsuch will feel compelled to make sure the menu items are made exactly as written in the cookbook.


He’ll carry “The Joy of Cooking,” the thousand page encyclopedic recipe collection with him wherever he goes, at least while he’s in the building.


Now these justices are scholarly people.  Many of them over time have toted tomes.  Scalia kept a copy of the constitution in his suit jacket.  But the Joy book weighs five pounds.  And being a snazzy dresser, the new Associate Justice does not have enough seniority to have a clerk do the heavy lifting.  So when he puts it in a pocket, his jacket will sag.


This is tough work.  You can hear him now telling the executive chef in the lunchroom that he cannot substitute whipped butter for regular in the interest of saving calories in some dish.


After all, if it’s in the cookbook, that’s what matters, not what some celebrity chef does in interpreting the recipes. The Joy of Cooking is not something for interpretation.  It’s not a “living document” like the constitution.  It is Black Letter Recipe.


Gorsuch is a Joy of Cooking Fundamentalist.  If it’s not in the book exactly as written, it doesn’t make it to the SCOTUS-teria.


Tip to Chief Justice Roberts:  Brown bag it from home, we don’t want you to faint from some mysterious dish on page 1,234, Ch. 24, Paragraph 2, Subparagraph H.

SPONSORED MESSAGE:
A word from the Huckabee Ministries and Chemical Company. 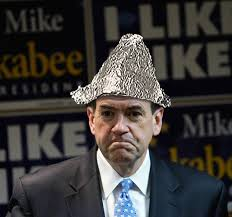 Rev. Mike says “Always use protection.”
Our founder, Rev. Mike Huckabee, is concerned about conditions in Arkansas, a state he once served as governor.  He is deeply saddened and disappointed by wrongheaded decisions from bribe-prone liberal judges who don’t want the state to execute eight residents of death row in an eleven day period.


So fresh from its triumph -- the cure for diabetes -- he has directed those at the business division … the chemical factory to develop an execution drug that will do the job at minimal cost using common household ingredients.


Research has begun. Count on Huckabee Ministries and Chemical Company to make life easier for everyone.


I’m Wes Richards.  My opinions are my own but you’re welcome to them. ®
Please address comments to wesrichards@gmail.com
All sponsored content on this page is fake.