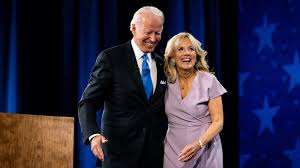 Guys in our demographic shouldn’t run.  It’s not healthy. Of course, you’ve been running for the last few decades, so maybe you’re still in shape.  Last Saturday night, you ran down the runway toward the lectern and weren’t out of breath when you got there.

Congratulations on your good lungs and, oh, yeah, on your election victory. It’s a sign of hope.  That’s the main message on the billboard.  Here’s the fine print beneath it.  Please don’t stop reading here.

You are now a stationary target from the loud left and the resonant right.  It was harder to hit you when you were only a moving target because ideologues and other dogmatics are lousy shots.  But don’t ignore them now, just because they missed you so far.

From the left:  OK, it’s day-one. It’s around 6 PM. The ceremony is over.  Chief Justice Rubberstamp didn’t lose his lunch when he swore you in.  The Inauguration balls haven’t yet started.  But wait.  Six hours into the presidency and where’s my Medicare for all?  Where’s that tax increase for the Koch Brother and Adelson and Gates?

Why haven’t you rejoined the Paris Accords yet? And are you serious?  A white guy for Secretary of Agriculture? C’on, Joe, why so slow?

From the right:  Who are all those persons of color?  See, we told you he was an anti-white racist trying to steal from the Job Creators!  And we still can’t get over that woman vice president.  She should be home making babies… and if she were, she still can get an abortion.

And you’ve had enough time but haven’t

Meantime, you’ve assembled an AntiCovid committee which can’t get access to current data from federal agencies.  That’s because the current administration won’t let you.  The custom is otherwise. Presidents-Elect and their people are supposed to get that kind of information before they even ask for it.  It’s happened that way for more than 200 years.

The data belong to the people, not the outgoing president.  Trouble is, trump acts as if he isn’t outgoing.  This all is not your fault.  But it falls on you anyway.

Sometimes you’re just too nice, too accommodating, too willing to work with the other side even when they have their fingers on the triggers and you have a target on your back … which you do.

At this point on your way to inauguration, I would hire a food taster.

Keep running, while those on your side get used to calling you Mister President instead of Joe.

-- Remembering as we do each year at this time the men of the Edmund Fitzgerald, last seen above water in Lake Superior 45 years ago yesterday. Twenty-nine bells. Times 45.