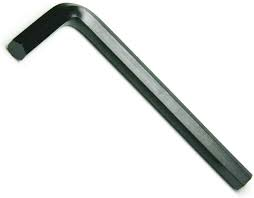 Is it an Allenwrench? Or an Alanwrench or Allynwrench? Ask Alan, Allan, Allen, or Allyn.

It was on the day Mike Tyson got back in the ring. It was a charity match with Roy Jones, Jr.  Who?  Roy Jones of whom many of us have not heard.  Two guys whose combined age made them a collective 105, fighting gamely and sometimes lamely to raise a few bucks for a self-created but evidently legit charity.

The fight was fun as they go. It ended in a draw.  Two guys -- they seem to like each other -- two belts, the “Frontline,” said the label.

At the same time, there was another fight in the kitchen here.  The householder won.  But it wasn’t easy. No belts, either.

This is the age of disc-less hard drives and phones that do 1,000 things well with making and receiving phone calls not among them.  So it can feel good to take on something mechanical and errant and to win.

Thus, when a chicken bone got caught in the garbage disposal the motor jammed.  The thing about chicken bones is they splinter easily, so easily veterinarians warn against feeding them to dogs or cats.

Once upon a time you fix a Chevy straight- six with a screwdriver, pliers and duct tape. This was like Tyson and Jones in the ring.  Easy pickings.

The motor has a little hole in the bottom.  You insert an allen wrench, wiggle it back and forth. The jam dislodges and the machine gets back to work.

Except when you’re at an age that getting under the sink is a lot easier than getting back up.  Except when you have to remove half a dozen items to get at the motor in the dark.  Except when your midsize accumulation of tools is scattered over two floors of a three-story house and in no way organized.

And it’s always dark under the sink.

So the fix took maybe 20 seconds.  But the tool-location expedition, the removal of the cabinet items, the getting down, the groping around to find the socket, the bumbling attempts to get the wrench into the socket took forever.

And then there was the spousal disparagement.  A lesson in international diplomacy here.  Ask the spouse to pul-leeeez put the “you are an idiot” stump speech on hold long enough to do the repair and rise from the floor.

Shocker! It worked. She pushed the pause button.  Of course, the underlying smirk that followed was almost audible just not visible from the darkness under the sink.

The morning after, the shoulders are sore. The knee and back are sore.  The Allen wrench collection has self-organized and been labeled.  But, as always, there are questions… important questions.

--How can one harness the power of the withheld spousal dissing to operate under more than the single instance of the other night?

--Should middle-aged fat former boxing champions take their exhibition match on the road?

And the most important question of all:

--Why are there so many damned ways to spell the name “Allen?”

I’m Wes Richards. My opinions are my own but you're welcome to them. ®