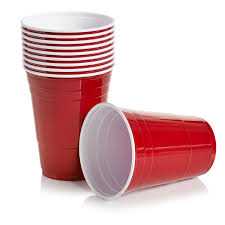 (FLYOVER PA) -- We rode home in the early darkness Friday evening as they began prepping for Saturday’s football game.  On the small front lawn of an off campus fraternity house, busy looking young men were setting up folding tables and putting out stacks of disposable red plastic cups, the kind that litter the streets here on Sunday mornings in November.

Girls with long swaying ponytails, short shorts and perfect thighs were jogging on the sidewalks.  See and be seen.

The giant cartoonish mountain lion that is the emblem of the home team and sits facing out from the nosebleed seats of the stadium was backlit and visible for miles.

Just another Friday night in a college town.

Our car was stuffed with needless junk just bought from the Bargain Outlet, a regional chain of stores whose motto, "Good Stuff Cheap," is shouted from the public address speakers every 30 seconds. The passenger compartment smelled like the kitchen of McDonald's.  Dinner in grease-stained brown bags.

New batteries in the electric garage door opener worked at a good distance, ending months when you couldn't open the door unless you were no farther than a few inches in front of it and pointed directly at the electronic receiver inside.

Who could ask for anything more?

Inside the house, Joe From Scranton was on television, refusing to deliver a victory speech because, he said,  uncounted votes deserve the same respect as those he'd already won even if they were for the other candidate.

A passenger asks if Joe really rode Amtrak to work every day from his house in Delaware to his office in Washington back when he was a Senator?  Yeah, he did. Just like Mike Bloomberg took the subway to City Hall every morning and swiped his own MetroCard into the turnstile. His didn't work any better than ours.

Things were getting normal again.

This post started life as a letter to a friend. It wasn’t intended to be transferred here.  But repurposing is something you learn when you grow up near the wrong side of the tracks though far enough to fool those whose only values were a brag-worthy bank balance and a Cadillac in the driveway when owning a Cadillac meant something.

Today’s Quote: “Our long national nightmare is over.” --Gerald Ford who became president when Nixon resigned.

Today’s Other Quote: “Lock (him) up!” -- Some schmuck from Queens who stole the presidency and who-knows what else.

The home team lost its third in a row.

Note to readers: Please look for my letter to the President- Elect Wednesday 11/11/2020.  You’ll get your copy at the same time he does.