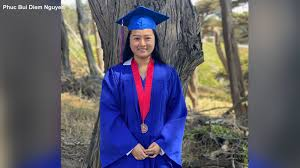 Try saying her name out loud. Yeah, sounds… um… like one of the words you can’t say on radio or in church.  Are you offended? Well, you shouldn’t be. It’s a perfectly proper Vietnamese name.

That didn’t occur to her math professor at Laney Community College in Oakland, California. He told her to “anglicize” her name, is what Matthew Hubbard did. It’s offensive to American ears, says he. Again and again.

Ms. Nguyen stood her teenage ground.  Professor Hubbard is on “administrative leave,” something that’s called the “rubber room” in some academic circles.

I ask again, are you are offended?

Many immigrant families change their names when they get here.  My father’s name was Max Rotholz. We all got changed in 1952.  Mark Richards didn’t fit him. But that was the drill. Too German? Too Jewish?

Showbiz is filled with name changes. John Wayne was Marion Morrison.  Not much wild west swagger there.

In Vietnamese, the given name means “Happiness Blessing.” (The name Rotholz means redwood, and there are some who believe Max was as immovable as a 700-year-old Sequoia. But that’s another story for another day.)

Meantime, Ms. Nguyen tired of being called a name that means “could” or is the year’s fifth month and intimated her professor was racist.

If you’re a professor in a northern California college with a student population that’s 16% Asian, and you discriminated against Asians, it would be well known far earlier in Hubbard’s 15 year career.  He just didn’t want to have to say “Phuc” every time he called on her.’’  His request to her was and is rude and insensitive.

So, barring incident, let’s give him the benefit of the doubt on the racism thing.  But more important than that, let’s give Ms. Nguyen the right to be called by her name.

Earlier name changers or assumers of nicknames wanted to fit into their new countries.  They wanted other people to pronounce their names more easily.

We’re less into that kind of change these days.

(MOSCOW) -- Vladimir Putin has weaseled himself a constitutional change that will leave him in power until 2036 when he’ll turn 84. Voter turnout was 87%. Stalin scored higher.

(MARICOPA COUNTY AZ) -- Rep. Andy Biggs wants the White House to disband its COVID 19 task force. Biggs chairman of the Republican “Freedom” Caucus. His home district, the 5th CD has one of the highest COVID counts in the country.

(ACROSS THE US) -- Tomorrow, July 4th is America’s 244th birthday. We’ll have some observations Monday 7/6 after we see how the country celebrates.  Maybe “observes” would be a better word.