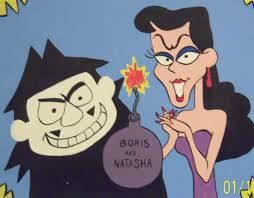 It’s just like the good old days of the cold war and the 2016 election. The Russians are here.  This time, the Russians are more interested in COVID19 research than in the US election, Ukraine, Syria or who invented the Polaroid Camera.

Yes, and according to US Intelligence sources, the little group of Borises and Natasha’s (above) have a cutesy name: Cozy Bear. Bears get cozy with your garbage cans and any food you leave on the porch or in the back yard.  Sometimes, they get cozy with each other. And if you’re in the wrong place at the wrong time, they may get cozy with you.  So, a decent name.

Is it a captive subsidiary of the Cozy Disinformation Network they’ve been running since the early days of the trump administration? Probably. Is Putin in on it?  Does a cozy bear defecate in the woods?

Now, why would they do this, the Cozies?  Well, here’s a thought. They get our basic research, finish the job of making a vaccine, fake the tests, approve the drug and sell it at $10 bucks a dose while US PharamaGiant wants $3,793.00 a dose.  And they’ll create a shortage so you have to buy above MSRP.

This is the same way they got Sputnik into orbit before we managed to launch Explorer-1 a year later.  The folksinger Oscar Brand put that contest thus: “(Russia’s) German scientists were better than our German Scientists.” Another cold war throwback.

The Tass News Agency says: “No, we’re not doing that.” Yeah, right.
This is the point where trump calls Vladimir and asks him point blank. Vlad denies everything. Then trump tweets “I believe him.”

US Intelligence is not disclosing the names of the research labs whose computers have undergone “possible” hacking. There are three possible reasons for this:

1.    Intelligence agencies never tell the public anything.
2.    They don’t really know who’s behind the hacking attempts.
3.    They don’t want to tip MegaPharmaceuticals that PharmaGiant is onto something.
There’s a certain level of comfort in this cold war redux.

(NEW YORK) -- Simon & Schuster says Mary trump’s tell-some book about her family sold close to one million copies on its first day of release.  That’s quite a bit more than John Bolton’s tribute to himself which up until now was among the publisher’s hottest sellers.

I’m Wes Richards. My opinions are my own but you’re welcome to them. ®
Any questions? wesrichards@gmail.com
© WJR 2020