4622 Code Blue in the Exorcism Ward 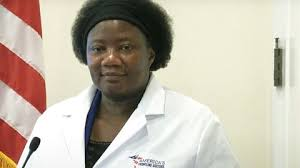 Does she accept Blue Cross or Kaiser insurance?

Does she accept Blue Cross or Kaiser insurance?

Who ya gonna call?  If the Ghostbusters are busy, your best choice is Dr. Stella Immanuel, the demonolgist who discovered the cause of the COVID-19 Virus: sex with demons in your dreams.

This is what they turn out at the University of Calabar med school in Nigeria?  Makes you wonder what’s going on over there.

Academic types have long been trying to find a link between spirituality and science.  So it’s not all that much of a stretch to find someone, somewhere who is trying to link junk science and junk spirituality.

And leave it to our Very Stable Genius to counter his racist reputation by finding and promoting an African woman as the likely Surgeon General in his second term administration.

Dr. Immanuel has all the trumpesque qualifications.  She’s a woman of color. She has a medical degree. She has a history of citing inappropriate or rogue drugs to cure rogue ailments.  She’s a very stable genius.

It’s easy enough to confuse ex-spouses with demons. You hear the stories in divorce court every day of the week. But that’s not the kind Dr. I is talking about.  She means REAL demons having sex with live humans.

Imagine this scene.  It’s a big construction project at lunchtime. Half a dozen burly guys are sitting on a pile of beams on the sidewalk eating their sandwiches and drinking their coffee.  A hot looking demon struts past them. They whistle. One says, “Hey look at the horns on that one!”

At the five o’clock whistle, the demon with “those horns” is waiting. She accompanies Bill Burly home at which time she turns into a male and attacks Bill’s wife who just got home from work herself and is napping on the living room couch.

“Honey,” she says, “I’m glad you’re home. I just had the scariest dream!” In her hand is a prescription for Hydroxychloroquine.

NOTES FROM ALL OVER:
(HELL) -- The Hades Protection Society issued a statement denying that members mate with humans.  “We don’t want to dilute our breed,” said a spokesdemon in an interview with Fox News’s Chris Wallace.

(MOSCOW) -- With trump in the White House, every day is Putin’s birthday. Here’s today’s present: The US is going to withdraw 12-thousand troops from Germany.

(NASHVILLE) -- Garth Brooks has asked the Country Music Association to withdraw his name from this year’s competition for Entertainer of the year. He’s won the CMA’s top prize seven times, three of them in the most recent four years. Brooks says it’s time for a new generation to start rising toward the top.

(LONG BEACH, NY) -- Some beaches have been closed on New York’s Long Island after sharks were spotted.  Sharks belong in the North Atlantic and were there before people were.  And probably before people existed. They do everything they can to keep it that way.

I’m Wes Richards. My opinions are my own but you’re welcome to them. ®
Any Questions?  wesrichards@gmail.com
© WJR 2020